One of my cat-bed heating pads broke. I would say it stopped working but, game veteran that it is, it actually still works. But it literally broke. It appeared to have snapped in half. It and its fellow (still in one piece) had a small amount of elasticity but not much. They may become brittle with the constant heat. But I don’t feel it’s safe to continue to run this pad, now that it is broken.

I bought these in November, 2011. They were a perfect fit for the two cat-beds I had recently bought. I could take the cushions out of the beds - a useful feature which I have found in very few other cat-beds - and place the pads between them and the bottoms of the beds.

They were efficient and hardy. They would run twenty-four hours a day, seven days a week for seven or eight months at a time. As cats grew older - first Tungsten, then Cammie, and finally, Josie - the pads ran all year ‘round. Being constantly on for years, yet remaining a consistent temperature and never presenting any safety issues are all good recommendations for such a product.

I have one more, just as I have one of the corresponding cat-beds remaining (the other fell apart; the beasts don’t treat them gently, and washing produced its share of wear and tear), and I have a heating ‘strip’, which is well-suited in shape to Minuet’s folded towel. But I will miss this fine old work-horse. It has served me and the cats well. 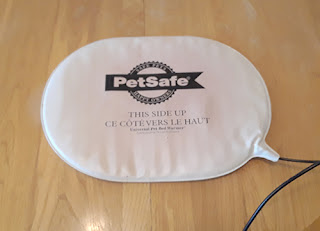