For His Dining Pleasure

Bear-Bear is doing well. He is taking his medicine, which will determine whether he has an auto-immune deficiency, or cancer. Readers of this blog have helpfully made other suggestions, which I will be discussing with the rescue-group responsible for the BB.

In the meantime, he must keep up his strength. He’s not just a fussy eater, he’s idiosyncratic. He loves a certain kind of food. What that certain kind is, changes from time to time, usually immediately following my purchase of a large quantity of tins of his previous favourite. He enjoys Fancy Feast; originally, it was cod/shrimp/sole flavour. Then, it was ‘chunky’ chicken. Moving on, he discovered the joys of the ‘gravy’ varieties. 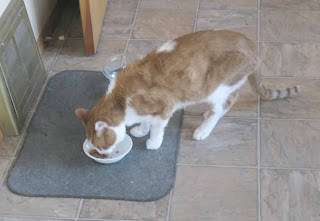 The flavours with sauce or ‘gravy’ have a lot gluten in them, but beyond that, Bear-Bear does not always eat the food itself. He will lick off the sauce, then demand more, leaving most of my cat-food budget uneaten in his dish. The other cats, who will sometimes eat left-overs, will not eat sauce-less grilled Fancy Feast. This, I believe, is a common problem with other households. However, considering the BB’s condition, and his possible fate, I am loathe to deny him what he enjoys. He does have plenty of hard food to fall back on.

Now and then, I can coax Bear-Bear to try something else, which he then usually finds that he enjoys. Bear-Bear himself may call this coaxing intimidation. I try not to be heavy-handed about it. He will stand at his full food-dish, his head hung dejectedly, and not moving, while I urge him to eat.

Sometimes it works. Sometimes he nibbles just to satisfy my demands. As I mentioned, he does taste it and frequently goes on, not only to eat it, but to insist on more. Until the next meal-time. He polished off a tin of Fancy Feast chicken flavour the other day. But the following morning, I could not get him to eat anything until I relented and provided him with some chicken with ‘gravy’. And then he consumed the whole thing.

Feeding Bear-Bear has the certainty of a throw of dice.

But he does entertain me, as well. A talkative fellow, he doesn’t meow. I’m beginning to wonder if any cat does. No, his preferred word is ‘raa’ (pronounced with a sound between ‘raw’ and the short, abrupt vowel in ‘ran’.)

“Raa,” he says, repeatedly, when he wants food, varied by slipping in a ‘rao’ now and then. And when I am bringing his dish of food to the food-mat, he gets under my feet and generally in my way with a nearly endless series of ‘nnggg’. And then he falls morosely silent if the dish doesn’t contain this hour’s preferred variety of nourishment.

Bear-Bear’s dining pleasure is often a purgatory for me. I hope I have him around to subject me to it for a very long time. 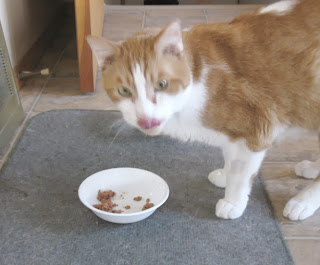