A New Toy Invades the Household

The beasts received new toys a couple of weeks ago. They are called Kick-a-roos and, though I’d heard of them, I’d not known of anyone in this area having them. They came as a gift from a fellow member in the PAW Society, for which I volunteer. The cats have had a varied reaction to them.

Josie seems to like them the best, though she doesn’t play with them so much as roll about on them. Considering her weight, that’s punishment enough for these poor toys. My Chubs can often be found lying near them or beside them - or on them. 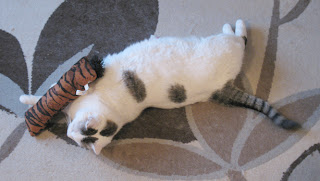 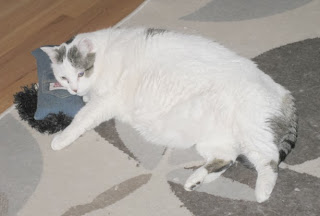 Considering the toys’ name, it’s a bit disappointing that my lot have done all manner of things with them, except kick them. Renn comes the closest, as you may see in the photograph below, but even in this case, he was pushing at the toy, rather than kicking it. My big boy prefers to wrestle with the Kick-a-roos. However he enjoys them, enjoy them he does. 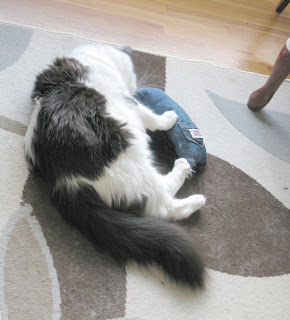 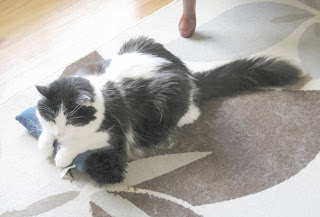 Tucker too likes to grapple with them, though, like Renn, he doesn’t kick them. Unlike Josie, I think my roly poly one could work his stubby rear legs around into the right position if he tried. He just doesn’t try. I don’t know that he is aware it is what he is meant to do. He is, after all, the only one of my cats who has failed to comprehend the purpose of the steps placed at the bottom of my bed. But he appreciates the fact that he can get his claws into the soft and sturdy Kick-a-roo, and then give it a good shake. 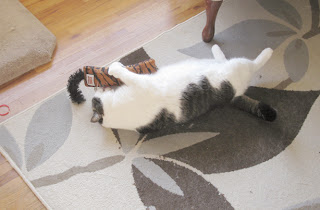 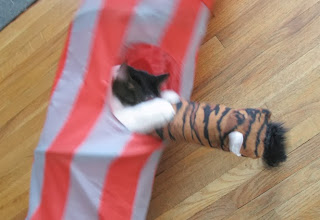 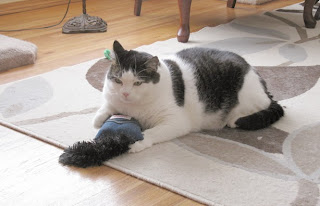 Even Tungsten, who rarely plays, has had a round or two with the new playthings. She’s usually above such silliness, but once in a while, her feline instincts overwhelm her and she gives a toy an old-fashioned thrashing. 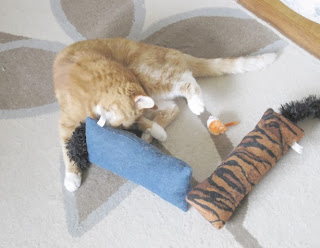 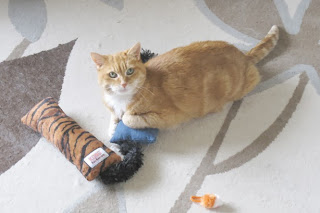 Bear-Bear, my long foster-cat, plays even less than Tungsten, and shows no interest in toys. This is probably for the best since, with his anaemia, he should not exert himself too much. Cammie, my Siamese foster-cat, on the other hand, has investigated the Kick-a-roos, and determined that little fuzzy mice are more along her line, especially when a human tosses them for her. 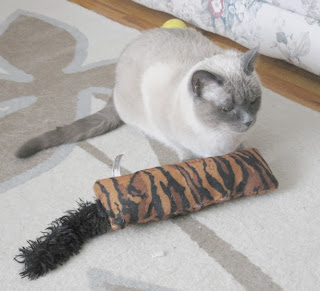 One thing you may notice from the pictures, though, is that most of the cats find the new toys very comfortable. They are excellently designed for providing a little rest once the energy of play is expended. And what cat can resist the chance of a little rest? 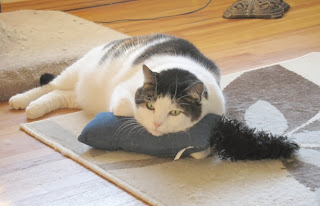