Just a Bit More About Cammie

A few days ago, I wrote about how Cammie was stalking Tungsten, to the latter’s disgust. This is just one side to Cammie, and though I’ve written about her progress previously, probably repeating myself, I think it is only fair to describe her in fuller terms.

The truth is that I am very pleased with how my Siamese foster-cat has adapted to her life in our household. She moved from a familiar, though possibly unpleasant, setting to a strange place full of strange cats, from no feline roommate to five. Yet she is learning about them. A while back, she discovered the tall cat-tree in the sitting room, and enjoys lying on the top platform. She also uses a lower platform for gazing out the window. Other cats, especially Josie and Renn, like this tree, too, and for similar reasons. Cammie would hiss and growl when she found one or the other too near a spot that she wanted, but now she tends to put up with them, and with very little protest, as long as they don’t get too close. 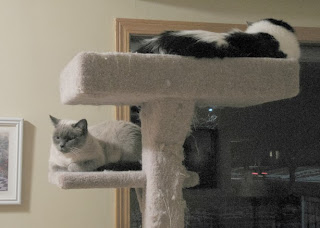 Even with the others, Cammie is improving. She and Tungsten sit within a couple of feet of each other while waiting for their soft-food meals to be handed out, though negotiating the obstacle course of other animals on her way to her preferred dining area in the parlour is still a hazardous journey for her, so she believes.

But, in fact, much of her hissing is becoming more perfunctory, something she evidently feels she must do, though she may be realising that it is not really necessary. She will hiss as she passes Josie or Tucker, for instance, but not look at them or increase (or decrease) her velocity while doing so. Hissing for her, I am beginning to understand, is often a way merely of expressing displeasure, not always actual hostility. And she is wandering about more, coming into the sitting room, even when it is full of cats, and she has sat on the couch while I was there, though she occupied the farther corner.

Short of having her adopted, I would like Cammie to go to a less crowded foster-home, where she will have more attention from humans, though it would have to be a special place. Mine could certainly be bettered, but to send her to another location, just when she is growing accustomed to his one, unless there were a very good reason behind it, might prove counter-productive. I am worried much less about her future than I was. She is growing friendlier toward me all the time (though she is a bit of a grouch in the mornings) and will make a good pal for someone, though that person will have to have patience.

But when an untrusting creature does trust, it is frequently a deep trust and one that will grow into affection. If Cammie does not give that fully to me, I will be satisfied, because I know that there is someone somewhere, some day, to whom she will give it. 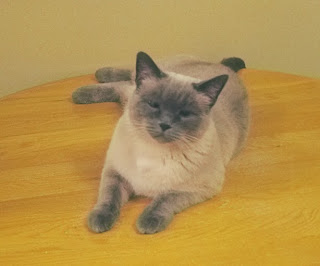