Josie may be a pacifist, but I have the feeling that Renn wants to be everyone’s friend. It’s true that he will growl and, rarely, hiss, but he is often the one who tries to get close to a new cat. Cammie is often voicing her disapproval at his proximity, but he will come near her without any ill intent. I realised recently that I have not often seen him move when another cat settles by him. Here he is on the bed, resting with Josie, who is not a cat who usually welcomes the presence of a fellow feline. 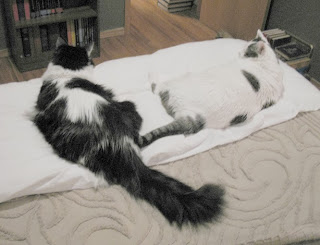 But with new cats, Renn does well. He took offence that Bear-Bear unwittingly usurped his position on the couch in the parlour each movie-night. It wasn’t the BB’s fault, as that is where I set up his little heated bed. Slowly, however, my big boy has been wanting to reclaim his place there, snoozing while I watch a film. This past Saturday, Bear-Bear was very comfortable on his pad, which no doubt felt good on this chilly night. He didn’t want to move, but Renn wished to lie down. So he did. 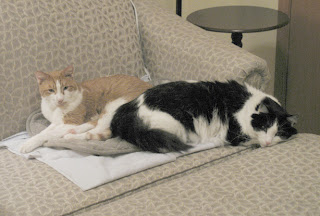 They stayed like this for the second half of the movie. At one point, Bear-Bear moved onto my lap, then returned later to his bed. But through it all, my big boy relaxed, unconcerned about our guest-cat, and only the end of the movie disturbed them.

Josie may be a pacifist, but Renn may be a peace-maker.
Posted by John Bellen at 11:14 AM