My roly poly Tucker has had to endure much in his few years. He always seems to get the short end of the stick, especially in terms of his health. He has recently ended a month-long ordeal during which I had to force pills into him three times a day. This was to cure a bacterial infection in his bladder, something which he has had previously. To make certain that this was gone, he had to provide a urine sample. The simplest answer to that problem was to bring him into the veterinary hospital and have a bit of urine extracted directly from his bladder. This would entail a frightening journey for him that I was loathe to inflict upon the little fellow. 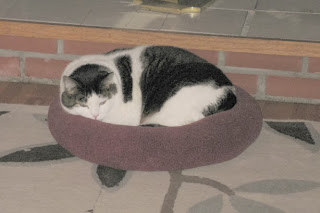 The other option was to obtain that sample at home. So I bought some plastic cat-litter. This particular brand was called ‘Nosorb’, and it was to be placed in a litter-box which, in turn, would be locked away with Tucker alone, so that no other cat could use it during a certain period. I was given a very small amount of the litter, which cost $7. I thought I would get a bag of it; not as large as a month’s supply of regular litter but sufficient to fill a litter-box. The quantity I received was not enough to cover the bottom of a quarter of the smallest litter-box I had. 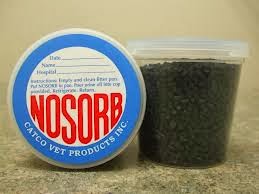 It was this that I put away in the back parlour with Tucker one night. I did not give him food but provided him with a bowl of water. I thought if he were hungry, he might consume some fluids which would then encourage his bladder. But I was not hopeful. Tucker did not enjoy being locked away. He clearly saw no reason for it and began crying soon after I put him in. He continued it through the night. I nodded off at some point, at several in fact, but he would wake me soon after with more crying. I was sure it was all for nought.

But in the morning, when I released the prisoner, I found that he had indeed done the deed in the microscopic quantity of synthetic litter I had given him. He must have been somewhat reluctant using that amount, and probably wondered how parsimonious his human had become that such an embarrassing amount was provided. It would have been similar to one of us making do with a few paltry squares of toilet paper. I was worried moreover that, given Tucker’s history, and the stress of being locked away with a nearly empty litter-pan, that he might resort to wetting on a couch or chair. He did not. I was very proud of him. I took up the sample provided in a syringe, and it was conveyed to the veterinary hospital.

Then, Tucker and I were foiled. The sample contained a huge number of bacteria, ‘too much’, the doctor told me, and it was suggested that Tucker was not entirely clean on the outside where the liquid waste was channelled from his nether regions. These unhygienic spots may have collected some of the bacteria. His bladder may have been clean but the sample was not, and therefore, it was useless.

The alternative was necessary. Tucker would have to be conveyed to the hospital for a more direct sampling. He hates going into the carrier. He is not formed for a smooth transition into a confined vessel, and did not make it easy for me. Then, during the journey there, he provided a sample of urine prematurely. I did not know he had wet in the carrier. It was as useless for testing, of course, as the amount he had given in the plastic litter, and for the same reason. An ultra-sound proved that there was not enough left in his bladder for procurement. The roly poly one made the trip back home not knowing that he would have to go again soon.

The truth is that I believe the infection gone. A huge dose of medicine, eighty-four pills, over the course of four weeks, should be enough to kill death, never mind an infection. This has all happened before, and such a procedure was entirely successful. The roly poly sausage is active, enjoying evening play-time; he visits the litter-boxes regularly and empties himself nowhere else; he is happy and has an excellent appetite. The infection is destroyed.

And yet, I must be sure. So my poor friend will make the trip to the doctor once more. He will be terrified and cry the whole way, and it may again be for nothing, if he wets inside the carrier. But it must be, for his own sake.

Tucker has had to endure much, yet he faces each day cheerfully. He purrs more readily than any cat I have met. I merely speak his name, or look at him funny, and the loud rumble begins, and his forepaws start flexing. He puts his fears behind him, forgotten again, as he seeks only to revel in life. He’s an optimist if ever there was one, and it’s to keep that optimism in the world for as long as possible, and in the best of health, that I must hurt him once in a while. It’s what a friend does now and then. He’ll forgive me. After all, that too is what a friend does now and then. 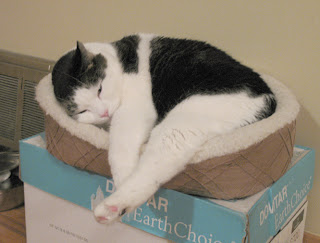