Cammie displayed some strange behaviour Saturday. I was cutting up vegetables to make some soup and, afterward, I stooped to pet her as she came up to me. She sniffed something on my hand and then flopped on the floor and spun about, as if dancing while lying down. The scent of something must have influenced her: it may have been onions (the strongest aroma) or carrots or celery. I haven’t heard of any of those vegetables causing a cat to be a little loopy, but then there’s no reason why it shouldn’t. Perhaps it is just Siamese cats who are so affected. Or just Cammie. 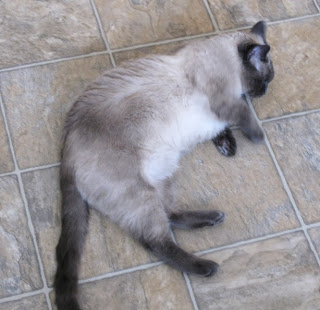 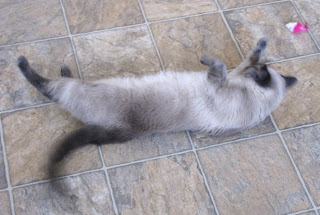 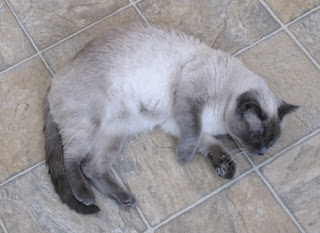 Also on the weekend, I heard Cammie make that peculiar sound that cats sometimes make that is half-way between a cough and vomiting. It may have been an incipient hair-ball. But with Cammie, it was short and striking. In fact, it sounded exactly like the sudden, brief laugh of a baby. Now, you may think that is adorable, but when you are drifting off to sleep in a dark house, with no other human present - that you know of -  it can be downright creepy, an abrupt “Blair Witch Project” moment, especially as it was the first time Cammie had done it.

Just another night with a building full of cats.
Posted by John Bellen at 1:04 PM