I have a stalker living in my house. Usually, that’s a bad thing. Anyone who has been stalked undoubtedly has unpleasant memories of it. But I’m an optimist (ask my friends; once they stop laughing, they will confirm this, I’m sure) so if a beautiful young woman decided to devote her life to mine, I would certainly try to find an advantage in the situation. That’s beside the point, however. The stalker I have living with me is making for a tedious and annoying situation. She is, it’s true, quite pretty, and her name is Cammie. 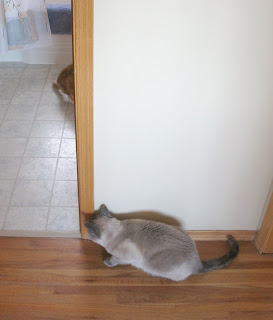 Cammie likes following the other cats, and watching them from a ways away. She will do this with Renn and Tucker, going downstairs after them when they intend to visit the litter-boxes, and waiting for them outside. She will chase them back up the stairs. She isn’t attacking them; if they stop suddenly, she does, too. And if they didn’t run in the first place, she wouldn’t chase them. Cammie doesn’t do this with Josie, perhaps because she barely reacts to my Siamese guest-cat, nor to Bear-Bear. The animal whom she bothers most is Tungsten. 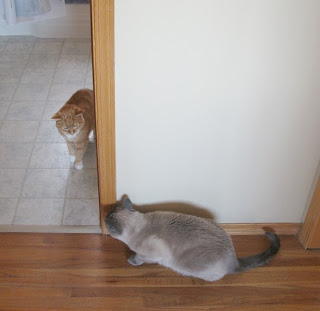 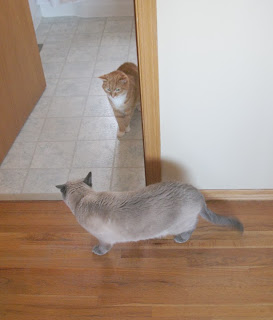 I have a hard time determining whether this is an attempt at play (improbable), friendship (unlikely), a fight (dubious) or intimidation (doubtful). Whenever Cammie does get close, she will stop, even when Tungsten does not know she is near. I saw her creep up on Tungsten and do no more than sniff the Tiny Terror’s tail. That’s not the behaviour of a cat challenging the leader for her position. 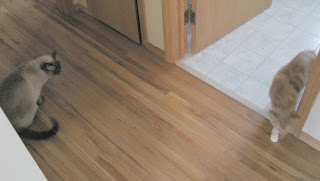 Cammie is conscious that she may be assailed when Tungsten is in a roused mood. In fact, Tungsten will never initiate a fight; Cammie doesn’t know this and when she antagonises too much, and Tungsten growls menacingly, the new girl will creep warily away.

To be honest, I don’t fear an attack by one or the other. Fights in my household have always been rare, and have resulted in damage almost not at all. What I am anxious about is that in following Tungsten even to the litter-boxes, Cammie may discourage the orange one from using them when she needs to. 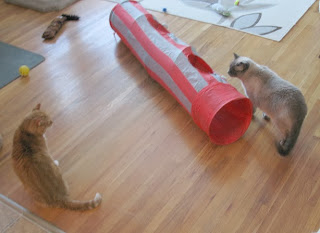 But the Siamese girl must sleep some time, and there are numerous times throughout the day when she is too comfortable or relaxed to bother moving. Tungsten will take advantage of this and go about her business then. And, to be frank, Cammie isn’t always on the prowl. There are moments when she simply chooses not to molest the tranquility of the household. 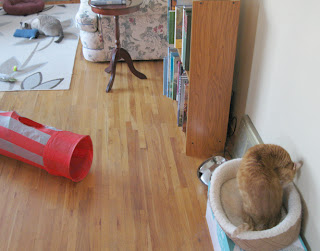 Other cat collections go through the same thing, I know. And I will readily admit that Cammie is much more adoptable than I thought she was (or, rather, she grew more adoptable more rapidly than I thought she would). As far as anyone is aware, she has never lived with other cats; considering that, her adaptation has been remarkably good. Much of her behaviour is for show; perhaps she feels the need to demonstrate, to me, as well as to other cats, that she is strong and not to be pushed around. She just doesn’t realise yet that her new feline roommates don’t want to push her around. At least, they will ignore her; at most, they will be her friends. Just not yet. 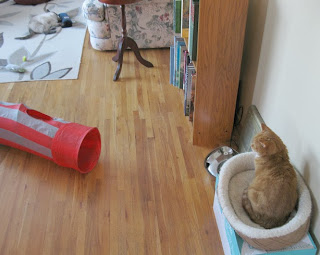