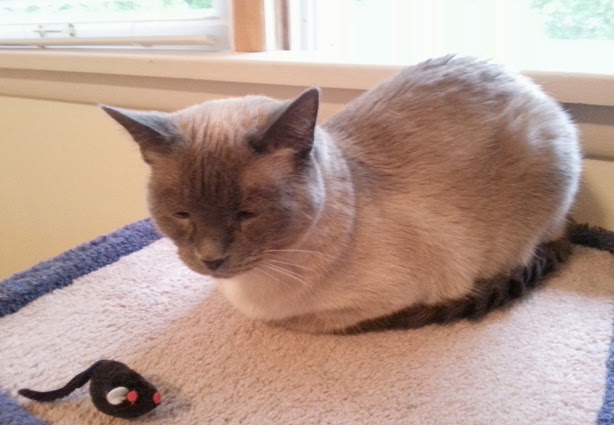 Cammie is back with me. How this occurred is a strange tale, though it may not be unfamiliar in many aspects to other animal-rescuers or groups.

Cammie was adopted at the very beginning of May. A woman from saw her during her internet search for a blue-point Siamese, a kind of cat that she fancied. This woman contacted the rescue-group of which I am a member, the Lethbridge PAW Society, and she and one of the Executive spoke on the telephone at some length. What was stressed was Cammie’s abused background, and how she would take a long, perhaps very long time, to trust a person. It was also pointed out that Cammie had not lived with other cats until she came to stay in a foster-home (mine) but had progressed well in her integration.

The woman from , X (as I will call her) told of her background and how she had one other cat. It was thought, by myself as well as others, that if Cammie could live reasonably well with five (including the late Bear-Bear) other cats, she would find one not much of an adjustment. Time was what Cammie needed, time to trust.

X travelled the seven hours to to collect Cammie. She seemed nice. The only traits about her that made me think otherwise were her reluctance to return communications (though her work made that understandable) and a vague apathy to what I explained to her about Cammie when we met in person. She appeared excited to get Cammie, and I assumed her behaviour was due to that – and the 567 mile journey she had just undertaken.

After that, contacting X for an update on Cammie was extremely difficult. She had agreed to provide information on how Cammie was doing, and to do a telephone interview for the PAW newsletter. X never returned calls or messages. Eventually, I did get hold of her and from what she told me, all seemed to be going relatively well, if not entirely happily. But I knew Cammie required time to settle down.

Because of the long trip she had had to undertake, Cammie was put in an extra large carrier, to give her room to stand and stretch during the car-ride. This was borrowed by X and would be picked up by A, a member of the PAW Society who would be travelling to on unrelated business in mid-June. Mid-June came, and A went to pick up the carrier. X continued to be difficult to get hold of, and at last agreed to leave the carrier outside her house, because she was working on that day. Stopping by the house, A found the carrier and decided to talk to whomever was home. She wanted a first-hand account of Cammie’s progress, and perhaps to see the little cat. Anyone who has rescued a cat would comprehend. No one was home. But a moment later, a relative of X drove up. He explained that Cammie was not doing well, and was not getting along with the other cats - of which there were three, not one. He also said, in vulgar language, that Cammie was messed up (psychologically). A asked if the relative wanted her to take Cammie back. The relative thought this an excellent idea, and stated that X would have no objection either.

Cammie made the long trip back to the next day. She is in my back parlour, where all new arrivals spend some time, though, because she is familiar with my home and my perma-cats, I intend to let her out later to see how she behaves. This is risky, since with Cammie, getting her back in a confined space will be next to impossible. Kola, who is the former Lola – repeatedly calling him ‘her’ because of the name was driving me bats – is a new factor in the household, but he is, so far, reacting well to hisses and growls (ie. he accepts them as the warnings they are and backs away.)

No one connected with Cammie’s adoption on this end can explain X’s behaviour, though we have our theories. I won’t bother with them here. X has, so far, not contacted PAW, and may never. It was agreed that she could adopt Cammie because we all wanted the little girlcat to have her chance at a permanent home. That did not work and we have learned our lesson, and fortunately have not lost Cammie in the learning. I am simply glad to have Cammie back, unhurt. Her progress in trust may have received a blow, but I don’t think it will be a severe one. I am thankful that A had to collect the carrier loaned to X; if it hadn’t been for that, and the timely arrival of X’s relative on an errand unconnected to Cammie, we would never have known about her predicament, and never have gotten her back. She is safe now, and I will start again to earn her trust. Perhaps she hasn’t forgotten everything she once learned. 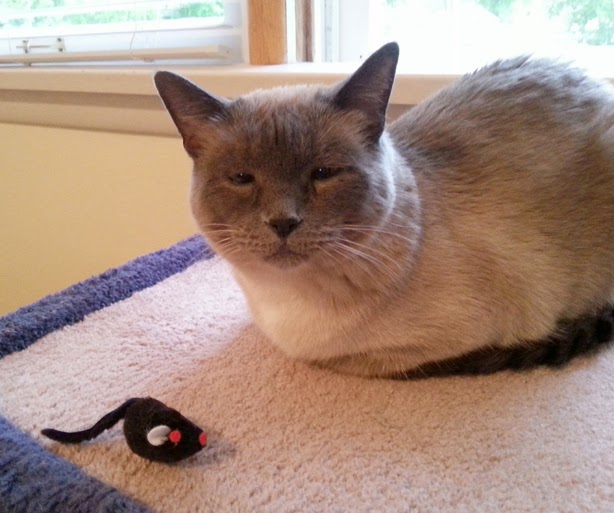