Yesterday, I came home from work to a battlefield. There was no blood, thank goodness, but that's about all that was missing. Tucker has been bullying Kola, the new boy, from time to time; plenty of hissing, a few swats and constant staring. I would try to intervene, literally; putting myself between the roly poly one and the object of his dislike. When it came to blows, I would speak sharply to Tucker. They had been interacting for weeks now, and I didn't believe it would get worse. I was wrong. 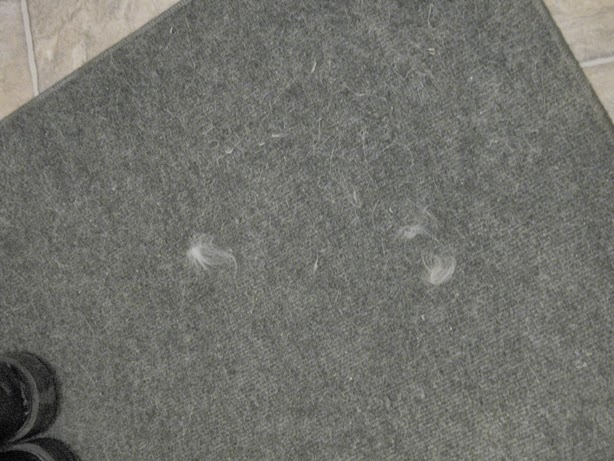 My first clue was the tufts of fur on the mat in the side-entry. I thought immediately that Tucker had been chasing Kola. I didn't figure that this would have been too harmful an incident. Then I saw fur elsewhere. Walking further into the house, I saw this. 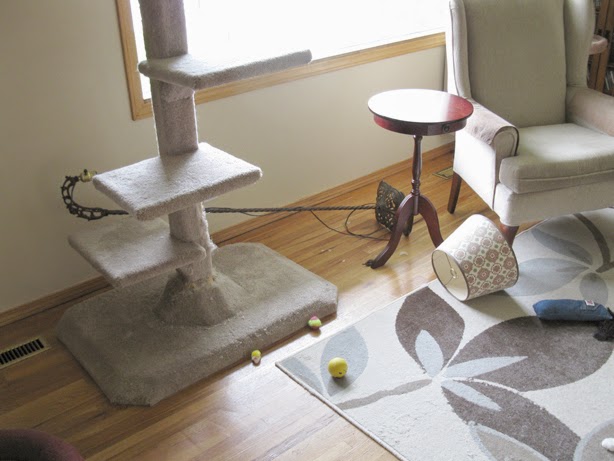 A sitting room lamp had been overturned, the shade rolled away. The light bulb had burst; there were shards of glass everywhere. The cats were wandering around, oblivious to the debris, and I was frightened that their feet would be cut. I made haste to sweep up the broken glass, and went to the basement to get the vacuum cleaner, to collect any bits of glass on the sitting room rug. I observed cat-hair down there, too. I think Kola attempted to take refuge on top of the armchair at some point. 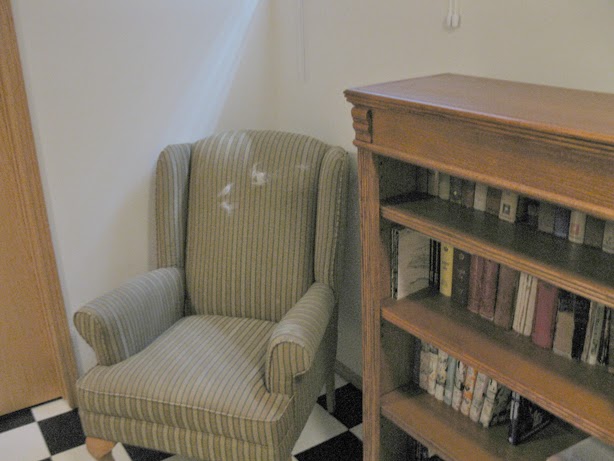 Returning upstairs, I found an unpleasant surprise, and a sign of how frightened Kola must have been. There were feces on the floor. I suspect that Tucker, in chasing – and apparently catching – Kola, knocked over the lamp, and the resultant crash and exploding light bulb scared the crap out of Kola, literally. And being in fear of his life in the first place probably dIdn't help. Tucker gets frightened at times but not that badly. There was crap in three places on the floor. And one place on the wall. Yes, the wall. I think the incident terrified Kola so much that he leaped in panic and hit the wall. Or perhaps he was still being pursued by Tucker while he was crapping. After things settled down, Kola, a very clean cat, thought to use a spot on my mat as toilet paper.

By the time I'd come back from work, things were calmer. Perhaps the toppled lamp and bursting light bulb brought Tucker to his senses.

But the cats weren’t done with me. I evidently did not fill the hard-food bowl high enough before I left. Six cats need a lot of hard-food. The bowl was empty. Not even crumbs. And the door to the cupboard where I keep the cat-food was open. A bag of treats was on the kitchen floor, torn open. 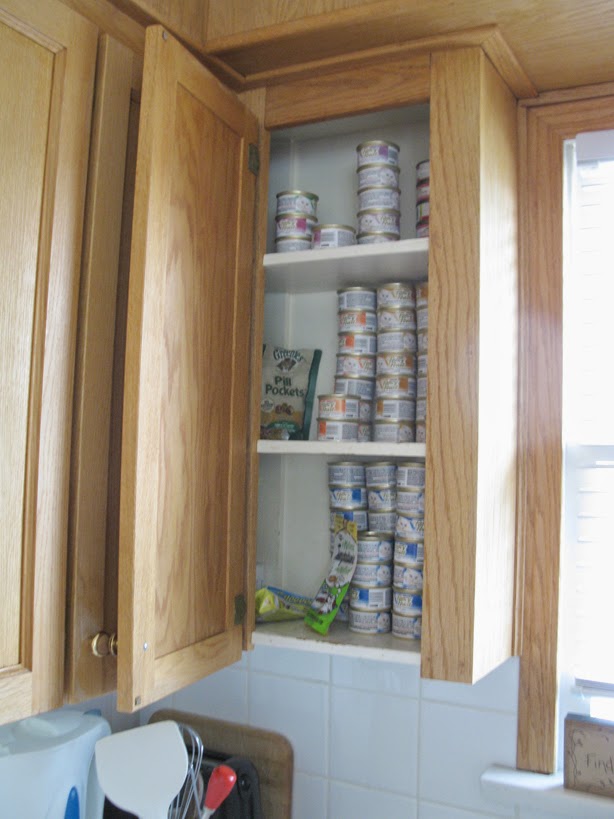 I spent an hour after I got home cleaning: washing floors and walls, using stain and odour remover on the rug (Nature’s Miracle; not a bad product for that) and vacuuming so as to get as much glass as possible. Then I fed the maniacs I live with. The good thing was that most were hungry enough to eat all the soft-food I gave them. Except for Cammie. That spoiled brat complained that Kola was in the parlour – where Cammie likes to dine – and wouldn’t eat a thing because of it. At least she ate from the re-stocked hard-food bowl.

Then I fed myself.

Now, Kola is terrified of Tucker, understandably, and spent much of the evening hiding under the bed or in a corner of the parlour. He tried to venture out but the mere sight of Tucker sent him scurrying for a hiding spot. I decided to lock him in the parlour (with a litter-box, food and water, of course). As soon as I put the litter-box in the parlour last night, Kola started talking, which he had not done since I'd come home. When I brought him re-stocked bowls after locking him in, he was lying comfortably in his enclosed cat-bed (it must have been sweltering in there, but he seemed to like it), and talked to me some more. He knew immediately that he was safe from other cats and was just as immediately happy. 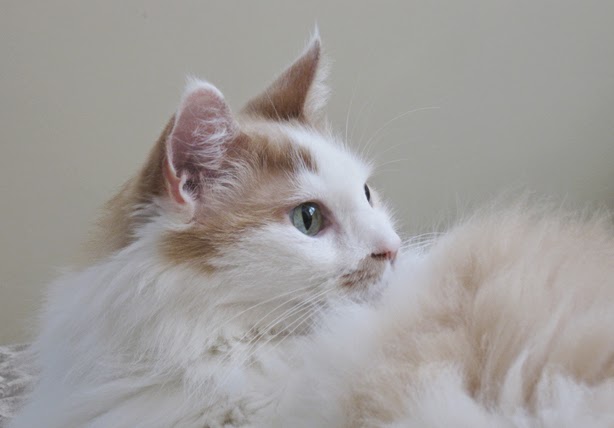 He stayed the night locked away, and was pleased and active this morning. He is remaining in the parlour by himself today, however, and will each day I am at work. I will release him in the evenings. He seemed ready to come out this morning, until he caught sight of Tucker. I will see how things go over the weekend. I am hesitant even to allow Kola out at night because Tucker may decide to take up a station near Kola and his stare will keep the new boy from moving, even to use the litter-box.

Fortunately, through all of this, Kola apparently was unhurt. Tucker may not have been trying to cause injury, just fright and subservience, which were achieved. I misjudged the success of the initial integration; then again, I've not had a cat act like this since Luther was my foster-cat, and I never expected it from Tucker. 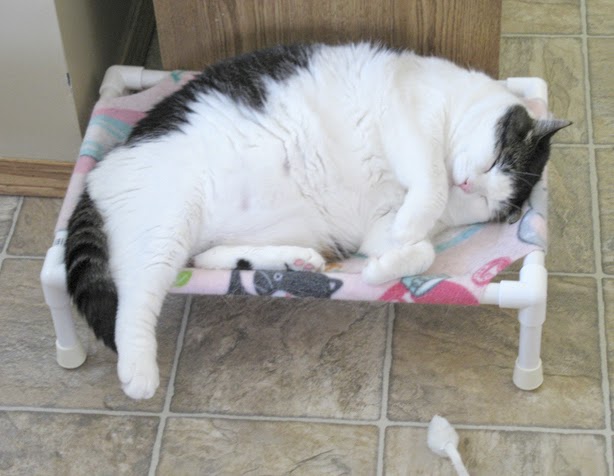 Strangely, Tucker, like Kola, is happier now than he has been for a few days. Not seeing Kola walking about put him in a good mood and his purring, muted somewhat the last few days, is back to normal. Cammie is royally annoyed because she can't use the parlour, 'her' room. Practically, it does cut down on the availability of open windows at which the cats may relax and sniff the outdoors. They all like doing that, but few enjoy being in proximity to each other, so losing a room's window to just one cat is restricting.

I will try to re-integrate Kola, of course, though it will be a very slow process. If he had claws, I'm sure the story would be different. Being defenceless must be terrifying. I don't know even if my presence will give Kola confidence, and he may linger in corners or under the bed unless he has the security of being in a closed room. I will have to determine a course of action after the next few days.

Whoever originated the phrase 'never a dull moment' must have had cats.
Posted by John Bellen at 7:37 AM