A Princess Under the Weather

Cammie is unwell. She has some rather ugly growths on her skin, in the semi-bald patches near her eyes. These growths swell and burst, releasing some blood and puss. She has had recurrences of these symptoms for some time, but they have never been as bad as this. They usually resemble small pimples and, if there is an amount of blood, it is minute.

She has been to the doctor, who considered the possibility of a food allergy but thinks they may be caused by eosinophilic granuloma complex. The trouble with this diagnosis is that that condition - and all others that were postulated - create itchiness. Cammie does not scratch the inflammation more than normal. In fact, I think I’ve seen her scratch her head once or twice in a couple of weeks. Less than a cat with an ordinary itch would scratch. She does not rub the area, either. It is not sensitive to my touch.

The Siamese princess has retained most of her appetite. She is eating a little less, but not so little that I am concerned. She even plays. Last evening, she jumped on to my lap and purred for an extended period. She has a new pastime, as well: getting onto my upper chest when I lie down and squatting right by my throat, where she purrs and purrs while I pet her. (As her claws are often kneading the skin at my carotid artery, I am comforted that the talons were cut recently…) This is one instance in which having an animal at my throat is a desirable thing. In any case, these are not signs of a severe effect from illness. 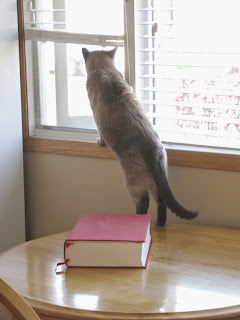 She is a little under the weather, though I can’t describe the growths’ effects on her as more than that. They are unsightly, to say the least. I have been applying Surolan to the parts of her head in question. At first, she would have nothing to do with the ointment. But I simply pick her up, carry her to the bathroom (to keep us isolated from the others) and rub it on. She has protested very little at this, perhaps relieved that she is not being force-fed hairball medicine. I have not seen any relief due to the Surolan, but it is early days yet.

To be honest, I think the doctor is puzzled by what Cammie is suffering. Aside from the hideous appearance and a mild malaise, my latest perma-cat is not suffering strongly from the condition. If the topical ointment does not help, she will be switched to the oral medicine, which will be tougher to serve but hopefully even tougher on the condition.

The princess is a sensitive cat, and may be feeling stress from Tungsten’s absence. The orange one did not like Cammie, but held some fascination for her. There is definitely a vacuum in the household without the tiny terror’s personality, and I wouldn’t doubt that the beasts feel it. I hope to report some progress in Cammie’s state after the weekend. Until then, I will get her on my chest and purring as much as possible. 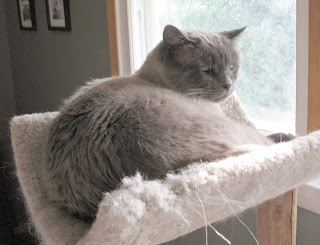