Cammie’s condition has improved considerably since she began her treatment for the eosinophilic granuloma complex from which she has been suffering. The lumpy swelling on either side of her head has vanished, and the open sores have healed and dried up. Most of the scabs have fallen away. As you can see in the photographs, they have left her with bald patches, but they seem to be less prominent than they were. 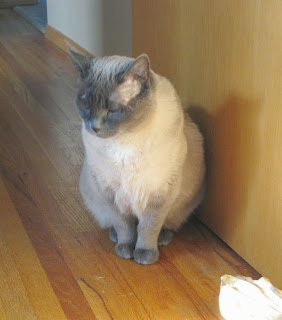 Cammie’s behaviour has reverted to more or less normal. She is now almost as active as she was, though with she plays a little less than before; that desire comes and goes. She is also less interested in her soft-food. She has only ever liked Fancy Feast, and only a couple of flavours of that. Her desire for it has decreased. This worries me a little and, though her complex may have been caused by an allergy to fish (the two flavours she enjoys are both seafood-based) and therefore might be alleviated by less Fancy Feast, it leaves her with no soft-food that she will eat. Experimentation will have to be on-going. 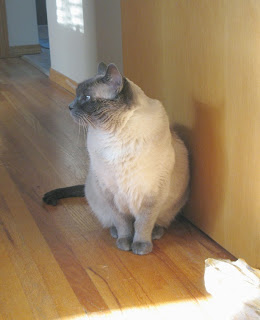 I am almost finished the Clavamox treatment. This liquid medicine was not difficult to give my Siamese princess. She dislikes having a syringe inserted in her mouth and liquid squirted in. Who wouldn’t? But she takes it, albeit with ill-concealed annoyance. Less successful now is the application of the Prednisone. This is being administered in half-pills. They are tiny portions, and I have been giving them hidden in chicken treats that Cammie enjoys very much. The treats are now gone, and the pill-pockets which have replaced them are, alas, only a pale imitation, as far as she is concerned. My attempt simply to put the half-pill in her mouth has proved a failure. She is easier to handle than I would have thought - no scratching or biting - but the pill is ejected each time, no matter how long I manage to keep it in her mouth. 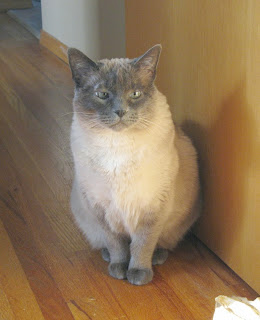 I have a couple of plans, however. I did notice that a pill-pocket in which I had inserted a Temptation treat vanished about half an hour after I had placed it beside Cammie. I must determine if indeed it was she who was responsible for its consumption and, if she was, whether she will eat one with both a piece of Temptation treat and a half-pill of Prednisone. That may be too much of a concoction for her to tolerate. The other plan is to dissolve the Prednisone pill in as little water as possible and inject it the easier way by syringe. The doctor cautioned me that, though this method is acceptable, it lowers the absorption value of the Prednisone. But badly-absorbed medicine is better than none.

Throughout this ordeal, the princess has behaved with remarkable forbearance. Though she will yowl and complain and, in extremis, hiss and growl, she has not intentionally injured me. I received one scratch when she tried to push my hand away, but other than that, she has submitted to indignity and discomfort with more grace than I would. After having syringes pushed into her mouth, being held in place, unwanted food shoved at her and horrible medicine forced upon her, she continues to get on my lap, she continues to purr under my hand. Cammie has travelled a long way since the day when she growled as soon as I walked into her room.

I look forward to her travelling a long way with me yet. 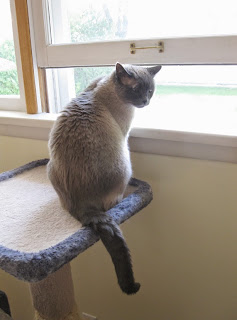