Renn is a strong fellow. He can haul himself up the post of a cat-tree, he can leap high into the air. His muscles are powerful, and his balance is superb. Most of the time.

He likes to play with a string-toy. He will slap his big paws down on it, he will catch it in his mighty jaws, he will lunge for it across the nylon tunnel. He is especially active when playing on the bed. I think he feels the springs in the mattress, and they give him the extra bounce. As well, the softness of the surface encourages him to take risks that he would not normally take. This can cause problems now and then. 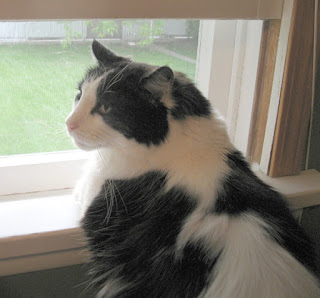 The other day, he was jumping about on the bed, making the string-toy fear him as he displayed his agility. But, alas, he leaped too far to one side this time and his rear legs barely touched the bed as his hindquarters fell. His forelegs came down on to the bedspread to arrest his descent, and for a moment, he clung to it like a mountaineer hanging on the edge of a precipice. I hurried over to help him up but by an herculean effort, he pulled himself to safety with his own strength.

Unfortunately, his claws, which are not sharp right now, were edged enough both to prevent him from  falling the further six inches to the floor and to tear a hole in the bedspread. I of course could hardly chastise him, as he was reacting through feline reflex - and did a good job of it at that. 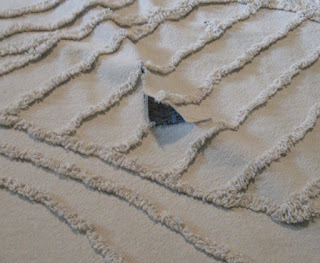 He was, perhaps naturally, disinclined to continue our play thereafter, and retired to the sitting room for some rest. I think damaging the household property unnerved him a bit, the poor cat. 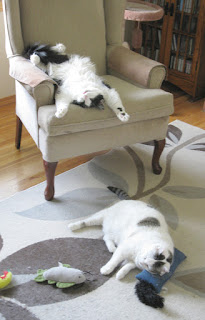