Josie is a fairly good-humoured cat. When she wants attention, she is not obnoxious about seeking it, and when she doesn’t want it foisted upon her, she is not grumpy in her protests. She can be insistent when demanding her soft-meal foods, but that is just feline impatience. She is pleasant-tempered but not noted for her joking demeanour, nor for her appreciation of irony.

Once in a while, however, My Chubs surprises me, whether it is her intention or not. This weekend, I was doing the laundry. I had washed and dried clothes, and had folded them at the dining table, which is the largest flat, clean surface fit for the task. Next, I wanted to change the sheets on the bed. Josie was lying there, no doubt very comfortably. She complained at her forced eviction, but she had been removed from places of rest before, so she told me how unfair the process was, waddled down the steps to the floor and away from the bedroom. I changed the sheets, then I returned to finishing with the towels I had left on the dining table.

Josie had found another comfortable spot: a freshly laundered bath-towel, now covered with her easily-shed fur. Oh, she removed herself readily enough from there; her point had been made. I think I saw a smirk on that little alien cat-face as she settled herself on a chair cushion instead. Very droll, my Chubs, very droll. 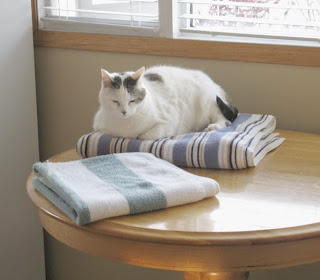