Do You Remember the Movie "We're No Angels"?

Tucker is an adorable roly poly sausage. He’s tubular, with no discernible neck, and a squeaky sound that sometimes becomes a trill. But he’s a cat, and so contributes his share of trouble to my household.

On the weekend, a friend came to visit. She gets along very well with the cats; none of them is afraid of her and Renn especially likes her attentions. Certainly Tucker has raised no objection to her. My guest was sitting on the ottoman in the parlour Saturday when Tucker jumped up, seemingly to greet her. Paying attention to something I was showing her on the computer screen, my friend was startled to realise that Tucker was wetting on her.

I don’t think it was an action directed at her personally. Tucker had done the same thing at the same spot a few months ago, when no one was near him. My guest was sitting near the same place. There is a spot downstairs on the linoleum floor which receives the odd pool of urine now and then. It happens once a month or so. It is on the same location which used to receive such attention when it was covered in carpet. It happens so rarely that I don’t think of it as troublesome. I suspect Tucker in those incidents.

The roly poly one has no difficulty using the litter-boxes. He is, in fact, most regular in his habits. But he is sensitive and I think that periodically he feels the urge to do something he shouldn’t. I believe this is the case with the ottoman. I hope that he doesn’t do it again, but I don’t feel that it was directed against my friend.

She was very kind about the incident, more than I would have been. Her clothes were not badly wet, but even a little can be upsetting. I am indebted to her that she was not angry.

Tucker was kicked out of his original home because he was wetting where he shouldn’t, due to the stress of a new baby. The smallest things can disturb his equilibrium, and yet the largest things will cause him little anxiety. Having given him an unspoken promise to keep him in safety and comfort for the rest of his life, he suffered no permanent punishment for his mischief. But he certainly didn’t get any treats that day, and he knew he had done something wrong.

Don’t let these pictures fool you. He isn’t always as angelic... 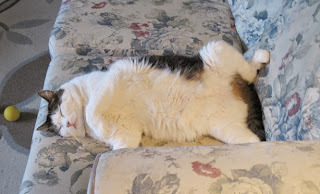 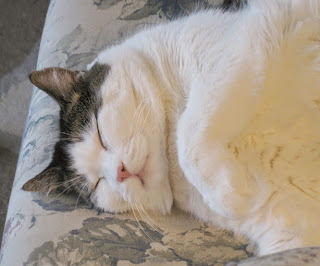