Saturday morning, I thought it would be Tucker’s turn at the veterinary hospital.

I woke at 5.30, as I always do, in order to give the sugar twins their insulin injections. Right away, I noticed that Tucker’s visit to the litter-box, which usually immediately follows upon my waking, was of very short duration. In the next fifteen minutes, he probably repeated that visit ten times, each with no result: no sounds of digging or litter being moved about, no scraping, and no waste left behind. As well, he wanted to lick his bum, and he tried to rub that portion of his anatomy along the rug.

However, about half an hour later, while drinking some water in the library, Tucker left a deposit. Afterward, he was relaxed and untroubled. He did not go back to the litter-box for a few hours, and he lie peacefully on the carpet. The deposit he made was hard. It was, after all, just constipation, though that in itself is nothing to laugh at.

So the sausage-cat is receiving a treatment of hairball remedy this week, which I believe is pretty much a laxative that smooths the way for the removal of food. However, I will be checking with the doctor tomorrow when I speak with her about Renn. The good news – aside from Tucker relieving himself at last – is that he likes the hairball treatment; it tastes good to him, which is practically unheard of in my household. And these days, I will take what good news I am given. 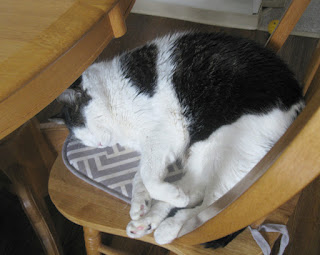