One of the best things about bringing a new cat into a household is seeing him discover new things. In the case of a former outsider-cat, the pleasure is increased by knowing that he hasn’t previously had the opportunity to enjoy items and activities in which he can now indulge. Watching Raleigh find new aspects of life in the cosy apartment is a delight.

Recently, it has been the nylon tunnel. It is always down on the sitting room floor. It’s not there just for me to trip over in moments of forgetfulness. No, in fact, the cats play in and around it and have even slept in it, just because they haven’t enough spots in which to snooze.

Peachy, however, now enjoys zooming through its length, usually when chasing the red dot. Sometimes, he will continue right through; other times, he pauses half-way down and then fires out the other end when he sees the dot once more. Then again, he will lie in it at the near end, and wait to ambush the string-toy as it goes by.

I like to see such things. When Raleigh settles down in a heated cat-bed, and then decides that it is perhaps a little too warm for that, and jumps up on an armchair for a snooze, I know that he is growing in comfort with his new home. He doesn’t ask permission, he doesn’t look warily about; he chooses his bed and has a nap. 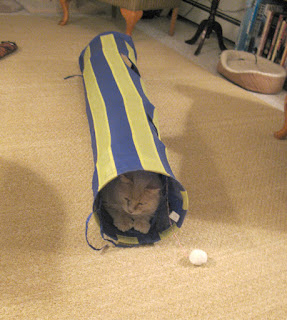