He Still Fits, So He Still Sits


There isn’t anything new to report from the cosy apartment, which, I think, is what I want: anything new, considering the situation, would likely be bad.

Parker is doing adequately. He is still eating; right now, he favours Tiki Cat wild salmon in salmon consommé. (I hope I haven’t jinxed it by writing this.) He generally eats a good dinner (after being without food all day) and much smaller amounts at snack-time and bed-time. Breakfast’s amounts can vary.

At one point, I locked Parker in the library with a bowl filled with a tin’s-worth of food, hoping that he would eat the whole amount through the day. He did, but then threw it up. This was followed by a refusal to touch that variety of food again. I have chosen not to repeat this experiment, as I can’t guarantee he will eat anything else, if he goes off his current menu. As well, the past couple of days I have found small amounts of vomit which could have come only from him. If he had had a full stomach at those times, all the food would have come up. Finally, there is the fact that, being hungry through the day, he is putting away a good amount in the evening, and under my supervision.

The Trout Towne Tabbies reminded me of sardines as a tempting dish. Parker did indeed eat a whole tin of the fish – then refused any other tins (the same brand and purchased at the same shop, but at different times), though he drank the juice from them. That is, unfortunately, how other foods have been stricken from the menu – a sudden and inexplicable disdain for them. I have heard of other instances of such behaviour among cats who are nearing the ends of their lives. This doesn’t mean that sardines won’t be offered again, however.

I would like to take this opportunity to thank everyone for their support and advice during Parker’s on-going problems. As with suggestions regarding the outsider-cats’ food and water, Cammie’s illnesses and all the other puzzles here at the cosy apartment, I appreciate the help and the company from those who read this blog. I am grateful. 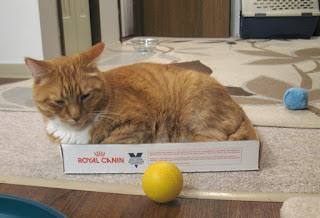