How He Will Leave Me


Wednesday afternoon, Parker went to see his new doctor. What she had to say about the orange boy’s health was not pleasant to hear.

Parker is dying. He will probably be gone within a few weeks. He has cancer. I saw the x-rays taken of him, and the tumour is huge. It fills at least a third of the organ cavity. His kidneys and pancreas have been displaced, pushed aside, as may be the lungs. It was impossible to see the stomach because of the tumour’s size, but it too was likely moved from where it should be.

Parker’s appetite will continue to diminish, as will his consumption of water, which is already much reduced from what it was. He may be in a little discomfort now - I have noticed him lying more often than normally on his chest rather than his side - but not in pain. That may come. I declined on his behalf the offer of painkillers for now. It is a trial for him to be given medicine and I want to deny him stress for as long as possible. I also decided against an increase in his insulin. The doctor stated that it may make him more comfortable, but it would also throw his diabetes management into confusion. That may seem to be academic now, like repairing a house under an erupting volcano, but I don’t want any changes in his insulin dosage to mask the effects of the cancer, which I will need to see in order to judge when to give him pain-relief, and when to say ‘good-bye’ to him.

My orange boy was not happy at the veterinary hospital. He has been growing more and more agitated and angry at different locations and different people. I don’t know if this is a symptom of his illness, the cancer making him uncomfortable enough to be cranky with strangers and strange places. He remains friendly and affectionate with me.

He ate an excellent dinner last evening, after returning from the doctor, and kept it all down (a major concern when someone who eats little eats much). I will be feeding him whatever he will eat. The percentage of carbohydrates in his food means little now. He has gone off Temptation Treats, which he had previously enjoyed, but still likes his bits of arrowroot biscuit, so he will be receiving a dish of those from time to time, though not so often that he grows weary of them.

The most difficult part - until the moment comes when he has to die - will be determining when Parker will go. I hope he will make it clear to me but, as many who have had pets know, that is not always the case. I will watch my friend, and listen to what he has to tell me, and hope that I understand him. Until then, we will carry on, and I will try to forget now and then how he will leave me. 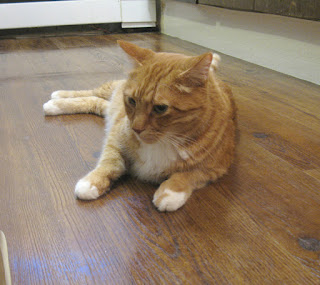