Josie: I don’t think you should lie across the human’s head like that while he’s sleeping, ‘your highness’.

Cammie: He wasn’t sleeping when I lie down on him. And I don’t like the sarcasm used when you addressed me with my title.

Renn: Are you sure he’s sleeping?

Tucker: Aye fink he may bee ded. Iz he ded?

Cammie: He’s not dead, you child. He’s unconscious, not dead.

Parker: I don’t hear him breathing. I think you smothered him.

Cammie: You’re down on the floor, you orange lump. You can’t tell anything from there. He is not dead. He is merely sleeping the sleep of the exhausted, having worked and slaved all day and half the previous night, feeding us, playing with us, cleaning up after us, and giving us the sort of life he believes we should have as poor, defenceless, innocent cats.

Cammie: You see, I can condescend to amuse you peasants. Hmm, I think he may have stopped breathing, after all. I have to use the litter-box, anyway…

Raleigh: I hope he’s not dead. I like his lap… 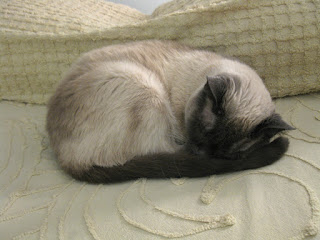