A Scientist Subjected to Science


Renn’s visit to the veterinary hospital went well. On the way there, my big boy cried in his tiny voice, and once out of the carrier in the examining room, wanted back in. He allowed the actual examination with a stoic acquiescence.

His lungs sounded clear, his heart was good; his teeth may need attention again. A startling discovery, though, was that he had lost about four pounds in two years. I have been weighing the beasts over that period and should have caught this. I knew that he was losing weight, but it’s been gradual, so I didn’t notice the full extent.

Renn was taken away to provide blood and urine samples. The blood tests showed that everything was acceptable, except his kidney values. They were a bit worrisome, but no conclusions will be drawn until the urine test’s results come back on Monday. He may be having kidney issues.

Until the start of the next week, then, I won’t learn much about Renn’s problem, though I know what is not a problem, including hyperthyroidism: his T4 results were satisfactory. His kidneys and weight-loss will be main questions, followed by those about his teeth.

Unlike the others whom I have brought to the veterinary lately, Renn behaved without much fear, once the poking and prodding were completed. While tests were being conducted in back rooms, my big boy stayed with me in the examining room. He explored. He climbed onto counters and looked into drawers, generally contaminating every surface. His scientific nature would not be denied, even under such conditions, and he was purring as he looked about.

Renn is going on twelve years old, and it was time for such a full examination of his physical condition. Despite what the results may be, his wetting in the bath-tub, which occasioned this medical visit, may be emotional or mental, and due to stress. While he has no animosity for Raleigh, the addition of a new cat may be a little unnerving for the veteran. And then there is Parker’s situation. While I try to be happy and optimistic, for everyone’s well-being, Renn, and the others, undoubtedly know that the orange-boy is sick, and may be reacting to it.

Such are the complicated dynamics in a large family, and I hope Renn will cope with them without too much discomfort and disarray in what must have been his pleasant routine. 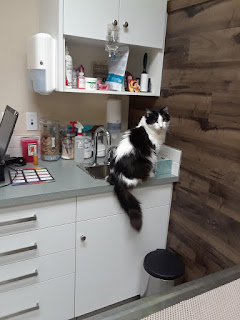 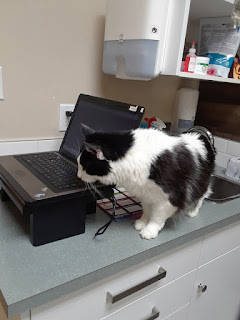 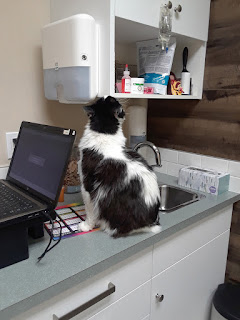 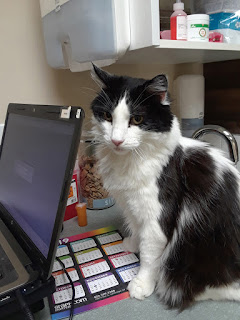 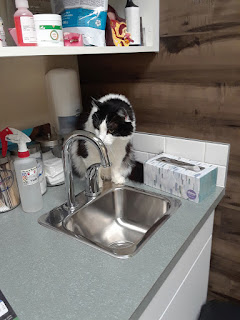 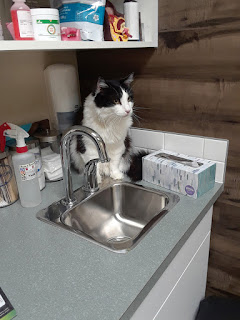 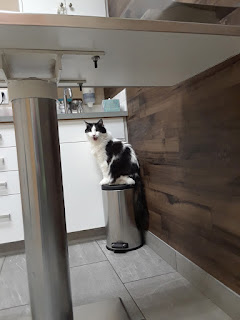 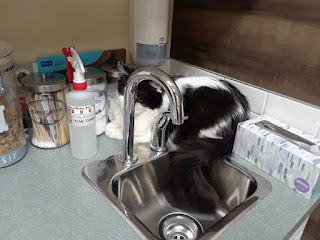 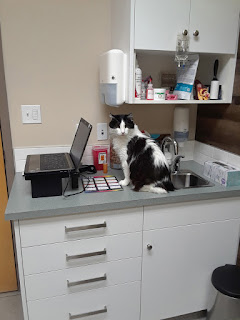