Doors That Are Now Closed


I think the worst thing about a person or animal going before his time is all the possibilities that won’t happen.

Cammie has always felt about Parker a little differently than she has the other cats. This feeling didn’t appear to progress, and certainly didn’t become friendship, but over time it may have done. Now, I’ll never know. 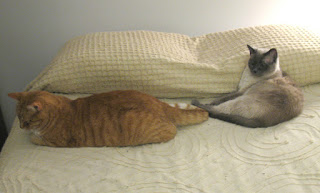 Last night, Parker jumped on the bed for a snooze. Cammie is often there already, perhaps between the pillows. She looks up when Parker disturbs the bed but doesn’t move or make a sound. She settles back to sleep, even if Parker is just inches away. 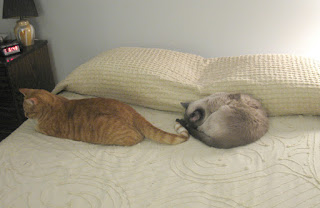 Then, last evening, I noticed this. Parker’s tail was actually touching the princess, and she accepted it. I can’t think of any other beast of whom she would be so tolerant. Usually, there would be a hiss, a growl and a re-arrangement of positions. Not with Parker. 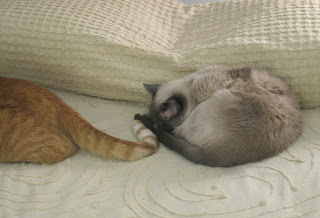 Why are some cats different than others, especially to other cats? What is it about Parker? What does Cammie see in him that is lacking in her other roommates? What does he lack that they have? It is an insoluble mystery; at least until that time when all mysteries are solved. Cats are spared thinking about possibilities; people are not. Sometimes I envy cats. 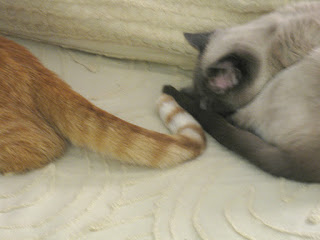