Things are improving here at last.

Renn seems to have recovered fully from his ordeal of a month before, which started with his dental surgery and continued with his reaction (possibly allergic) to the pain-killer they gave him. He is eating well (as much as he ever does) and, though his fur is still thin in spots, it will likely re-grow. If it does not, it won’t trouble him.

Tucker is currently eating well. He is under the influence of Mirtazapine, however, so that is stimulating his appetite at the moment. There is a possibility that his new kidney medicine is reducing his desire for food; after his respiratory ailment is cured, I may have to experiment with taking him off his kidney medicine and see how that affects his hunger. In the meantime, however, his nasal congestion is very limited. It expresses itself mainly at night, but no longer is causing him discomfort or sleeplessness. Even so, on the advice of a friend, I renewed his anti-biotic prescription just before the weekend, so there would be another week of it, without interruption. I think it is better to have it attacking an infection that is already on its way out than have the infection realise it doesn’t have any more medicine to fight, and try to make a comeback.

Neville appears not to have suffered much from what may have been his brief affliction with Tucker’s illness. His solid waste isn’t - that is, it’s very liquidy. That may be a symptom of what he caught from Tucker. If so, however, it didn’t affect Tucker that way. In any case, the Former Thin Man is eating well and is now talking about his food again, which is a good sign. He took up residence in the cat-beds just before the weekend; as he did when he had his fur shaved, he seems to have discovered that he rather likes lying in them, so he is spending more time in them, which is fine with me.

The important characteristic that each of the beasts is exhibiting is normal behaviour. Renn, Tucker and Neville are acting the way they should. That suggests to me that they are doing well. I won’t become complacent in the fight for their health but it shows that, at the moment at least, we seem to be winning it.

I want to take a moment to thank the generous human (I don’t know whether she’d want her name given) at Meezer’s Mews & Terrieristical Woofs (there’s a mouthful!) for the beautiful memorial badge she made for my Chubs, Josie. You can see it on the sidebar. It is most comforting to know that people who never met my old lady cared about her and how her departure has affected the Cosy Apartment and its residents. Kindnesses like this mean a great deal. 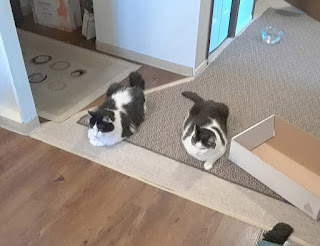 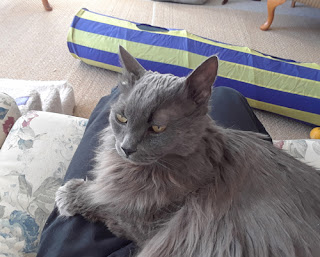