And Now, It's Tucker's Turn

Tucker had to be taken to the veterinary hospital yesterday. Monday evening, he started continually swallowing, an action punctuated by gagging. He was a little better the next morning, but I brought him to the doctor anyway. Nothing was stuck in his throat - at least nothing that could be seen; there was no apparent cause of his problem. He had not had blood exams in a couple of years, so, considering his age, I decided to have blood and urine tested. Tucker is in stage three kidney failure.

My boy may be feeling nauseous from the effects of his kidney ailments, though the swallowing and gagging have abated this morning. They have been replaced by a reluctance to eat anything but Temptation treats; this, in spite of the injection of Cerenia given yesterday afternoon. He ate a small amount of food after coming home from the hospital, but very little since then. He has been drinking much more water than of late.

Renal failure may explain his swallowing, as such a condition can make a cat feel nauseous. This morning, however, he was not swallowing repeatedly. He seemed to be suffering from an excess of saliva and, certainly, from inappetence. I will be trying to give him subcutaneous fluids tonight - his diabetes and kidney failure must be combining to give him a dreadful thirst right now - and experimenting with some new foods and combinations thereof.

My poor roly poly - who has been neither roly nor poly for some time - has suffered a great deal of physical trouble in his life, from urinary blockages to the removal of all his teeth to diabetes. Now, he has this with which to contend. He has usually maintained a cheerful demeanour through it all but, this morning, I couldn’t get him to purr. I hope to bring back that happy sound this evening. 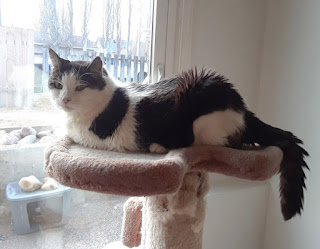