Yesterday, I was able to have a long discussion with Tucker’s veterinary about the roly poly’s condition. I will be collecting today several medicines to deal with the effects of Tucker’s renal failure, and I will start their application this afternoon. He is already receiving sub-cutaneous fluids.

I have been able to observe my boy more over the last few days, with an eye to his circumstances. He has been quite uncomfortable in the late evenings, restless, moving from one position to another; I take this as a sign of pain. This subsides into discomfort for the rest of the night, with excessive salivation in and from the mouth, and difficulty breathing, the latter, I suspect, due to an increase in mucous in the nose.

In the morning, after he is given food, Tucker is more restful, and even, I think, manages to sleep, which he hasn’t been doing during the night. Nutrition is being delivered through a syringe, by me. Tucker does have a small appetite, and will eat a few kernels of hard-food, or a small portion of soft, but he doesn’t try for long. It may be that he cannot taste it, or that the saliva in his mouth taints it. When put directly into his mouth by syringe, however, food seems a bit more enjoyable for him; he doesn’t fight against my efforts. I am sure he’s hungry and wants food; he just doesn’t like it right now. Though it may not be an effect of eating, his greater calmness after a syringe-delivered meal suggests to me that he should have food in the middle of the night, too. It can’t do him harm. So I will prepare some liquidy goodness for him before bed-time.

When he is experiencing discomfort, there is, in addition to the extra saliva, some gagging. This probably follows on the extra spit. The fact that it hasn’t brought up more than some sputum tells me that the problem isn’t in his stomach. Kidney failure can produce ulcers in the stomach, but also in the esophagus and mouth. The doctor saw, during his examination, nothing amiss in Tucker’s mouth, so a renally-induced difficulty in the esophagus may be a complication. It may, though, be no more than a build-up of saliva.

But help is on the way. Some kidney medicine will be tried today. Tucker will also receive some Cerenia to calm the stomach – though I don’t know that that is a great issue here – and has been given some Mirtazapine to increase the appetite. He is, of course, still being given his insulin (his blood-sugar numbers may be thrown off by this new issue and its medicine), and, as mentioned above, subcutaneous fluids. To keep him regular, he continues to be dosed with a mild laxative, though this is given at the end of his feeding, so there is little effort to it for either him or myself.

I and the doctor will confer further early in the coming week, and may adjust Tucker’s medicine then, though it will still be early days to see its effects. In any case, something is being done to ease his misery and, hopefully, increase the quality and length of his life. 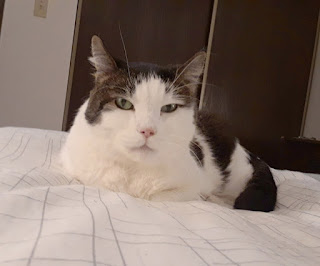