Tucker is doing better. Last night was an improvement on recent evenings, when it seemed that he could barely breathe. His breathing, which had usually turned rough after sunset, was easier than it had been, and he didn’t salivate much at all. I think he was able to sleep some during the night. His nose is still clogged but not entirely plugged, I think. He even ate a little soft food. I have a wide variety available for the menu here, and I have been trying to tempt him with everything, regardless of its effect on his diabetes - first things first. He appears at the moment most to favour some of the relatively cheap hard-food I lay in for the outsider cats. I don’t foresee a difficulty in returning him to better quality later.

My roly poly was in a generally cheerful mood last night, too, purring more.

I will probably have to continue feeding him some food by syringe. The kidney medicine in powder form could be added to his food but even in good times, Tucker rarely eats enough at one sitting to account for his entire dose. Mixing it with soft-food, therefore, won’t get it all into him. I now mix it with a small portion of Recovery and then put it in a syringe. That way, he gets it all. He doesn’t mind it and it is over quickly. This method used just for his medicine will be less work for both of us than the four feedings a day he has been receiving for the past two weeks (seven on days when I am home), just to keep some nutrition going into him.

And I bare in mind that his ordeal is not over yet. Optimism is good, but is best indulged in the same way one steps from a car: not to be done until the ride has come to a complete stop. 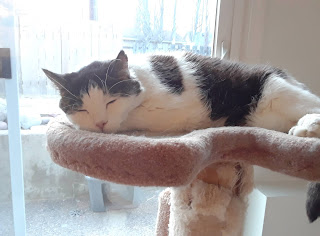