Do You Want the Good News First?

The good news is that Tucker is doing better. He is still somewhat congested at night, though not as bad as he has been. He is still not eating any soft-food except small portion of Instinct lamb and venison that was given to me by someone for my outsider-cats. The roly poly is still getting the syringes of Recovery, of course, because his kidney medicine is in them. Today, I renewed the prescription for his anti-biotic, as I feel that that is helping him, and I don’t want to end it too soon.

The bad news is that there is something amiss with Neville. He has been swallowing - without reason, so far as I can see - and periodically hacking; similar to Tucker’s early symptoms. He is, so far, continuing to eat, but not in the amounts that he usually does; nor is he eager for his food as usual. 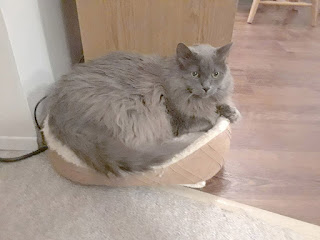 I thought that he may just have a hairball, so I have begun dosing him with hairball medicine. I did that last night and he appeared quite indignant about it. He strode straight from the bathroom, where I gave him the medicine, to the heated cat-bed in the sitting room, and lie down in it. I can’t remember when he last lie there, if he ever has. Tucker came out of the bedroom at one point and saw Neville there from across the apartment. 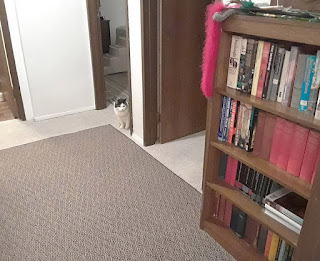 Though Tucker is sleeping there less now that the weather is warming, I think he still regards it as his spot, and stared at the Former Thin Man from down the corridor for about twenty minutes. 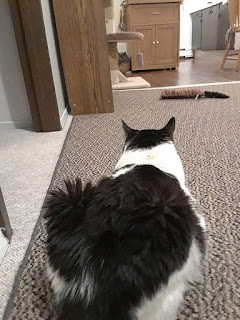 Life with the beasts is interesting, if nothing else. I would prefer a life like my piddling bank account - something with less interest.