At last Tucker appears to be showing signs of improvement. For three weeks, the roly poly has been refusing most food, eating only a nibble here and there, and never enthusiastically. Over the last few days, however, he has been eating more hard-food, especially first thing in the morning. It is, unfortunately, not high-grade nutrition: last week, I offered him some of the lesser quality hard-food that I buy for the outsider-cats, hoping that he would like something, and he seemed to favour it, though he didn’t eat much until this week. He is starting to eat the perma-cats’ own food now, too.

As well, yesterday, he ate a small amount of Fancy Feast. It was only a quarter of a tin all told, but that is about the same amount he has consumed in total over the past three weeks. More important is the fact that he wanted to eat it. 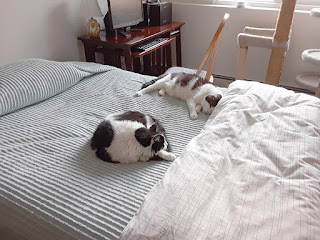 Also telling was his behaviour at dinner. Included on my weekly menu is a meat-pie, which Tucker has always fancied. After I eat, I leave a little of the gravy for him and he licks the dish clean. It probably isn’t good for a diabetic cat, but it’s a treat just once a week, the amount of which would probably not overflow a thimble. But for the past three weeks, he as not been interested in anything I have eaten, not even this. Yesterday, he waited on a chair beside me while I ate and then licked the dish clean, as of old, even eating the little cube of beef I left for him.

On the weekend, I had obtained from the veterinary some anti-biotic, which may have tipped the scale in Tucker’s favour. I am surprised the doctor didn’t prescribe this originally. Then again, it may not have had anything to do with Tucker’s improvement. Nonetheless, he will be given the full amount. 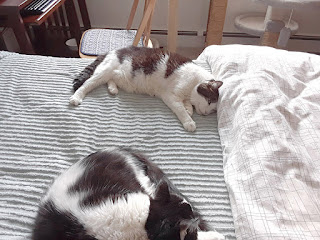 I know my beasts too well to expect this to be an uninterrupted curve into restored health. But Tucker is doing better. His excessive saliva and mucous is gone and, though he continues to breathe roughly at night, the sounds are less severe and he appears to be less uncomfortable as a result. I continue to supplement his voluntary intake of food with Recovery in a syringe. That will likely never cease, as it is a means of giving him his kidney medicine; the powder would not be wholly consumed in any loose food to which it was added. And one or two syringes of concentrated nutrition twice a day won’t do that sausage of a cat harm.

So far, then, we at the Cosy Apartment are guardedly optimistic about Tucker. He is purring more and behaving a bit more like his old self. And he is even snoozing with his eyes open. I think the imitation of death is a good sign... 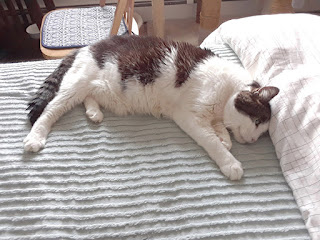