On the Subject of Old Habits...

Do you recall a couple of entries ago when I wrote positively about the encouraging signs among the beasts resident at the Cosy Apartment? Well, never mind all that.

This morning, before I left for work, I found Tucker to be rather lethargic and uninterested in food. That really was nothing new. But there was something different about this morning’s behaviour. I gave the roly poly his usual injection of insulin; that made me wonder if he was having a problem with his blood-sugar. I took a reading of his blood. It stood at only 3.2.

Tucker has had habitually high numbers. His nadir – the lowest his blood-sugar count dips – is usually in the mid- or low teens. That is actually too high, but his doctor and I agreed some time ago that clinically Tucker was showing no signs of difficulty with his high numbers. What’s more, his ‘curves’ - monthly studies of his numbers through a whole day - were consistent. The veterinary and I were both pleased with where Tucker was.

Now, however, he had dropped to a place below what is healthy – rather than above it – and, as I had just given him insulin, it was bound to go lower. I resorted right away to corn syrup. Rubbed on the gums, it is absorbed quickly and of course adds a tremendous amount of sugar to the blood. Except in this case. I checked Tucker’s numbers fifteen minutes later and they stood at 3.0.

I gave him more corn syrup. The result was 2.8. Ten minutes after that, it had dropped to 2.5. I called my veterinary hospital’s emergency line. I was told that I could bring my boy in to the hospital, where he would be given an intravenous solution to raise his blood-sugar, and monitored through the day. By the time I was in the taxi with Tucker, I had given him a sugar-water solution by syringe, yet he was at 2.2. This was nearing coma-land.

Fortunately, the situation was taken in hand at the hospital. A few hours later, it was reported to me that the little patient had edged his way up to 4.0. The crisis was averted, and he was out of danger.

It is night-time now and Tucker is back with me. He was given a prescription of Mirtazapine, to stimulate his appetite. It has worked this evening and he had a good soft-food meal. Naturally, the doctor recommended a much lower dose of insulin; even so, for the next while, I will test Tucker’s blood before each shot. If it is in the normal range, or even below 10.0, I will not give him any. Testing will go on until a pattern is established. He will continue to receive his kidney-medicine; this has led to a loss of appetite in some cats, and I will watch for this. If it does that with Tucker, I will have to end it; if tonight is a model, though, I needn’t worry about it. It is given in a syringe of food, so that helps a bit, too.

He will also receive his subcutaneous fluids, as per schedule – though the schedule will be off a bit until the weekend. He should have been given some fluids tonight, but I think he has been through enough for today. I will give them to him tomorrow. Also, he is finishing up the last of his anti-biotic for the nasal or throat congestion from which he suffered.

There is a great agglomeration of drugs and medicine that Tucker is receiving, but some of that – the anti-biotic – will end within days, and the rest will sort itself out into a helpful pattern. There is no indication of what caused his blood-sugar to plummet, but if the kidneys are not working to clean poisons from the body, blood must surely be affected. With Tucker in stage three renal failure, I don’t suppose I can expect his blood-sugar and his diabetes to remain unaffected. I will have to be on my guard against this. The corn syrup probably had little effect this morning due to the insulin that was pushing the numbers down.

Once again, Tucker has suffered a medical emergency, and once again, the roly poly has come back fighting. Today’s battle was won, but the campaign goes on. 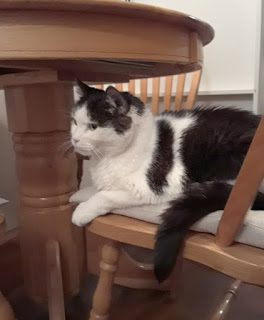