I’ve long said that cats are creatures of habit, and that they will maintain their routines forever - until they don’t. Sometimes, they change what they do, and other times, they won’t.

I noticed this during the weekend, watching Renn. He was lying on the rug between rooms in the apartment, probably waiting to turn up his nose at whatever I offered him to eat. He was lying with his front legs over a Kick-a-roo. He often does that. 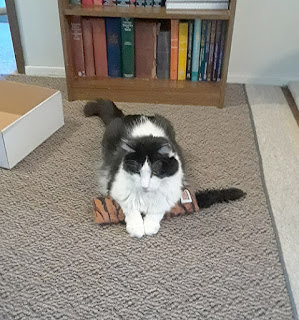 It reminded me of a picture I had taken years ago. Below is a photograph from 2010 of a three year old Renn, lying on my slippers in our first apartment, even before we moved to the house. I chuckled at the time that he lie in such a manner. I no longer keep my slippers on the floor, but there are plenty of toys lying about, all ignored, and some approximate the size and shape of slippers - or the slippers approximated the size and shape of some toys.

Sometimes, cats change what they do, and other times, they don’t. Whatever made Renn feel in his youth that this position was comfortable is relevant today. There is something to be said for old habits, especially when retained by old cats.