Early in February, 2019, after Parker had been diagnosed with cancer, I wrote an entry on my blog about how his good days were splendid days. I knew he did not have long to live - though, in fact, he outlasted the veterinary’s prediction by some months - but there were days when Parker ate well, played, walked in the sunshine, and purred. Those I chose to think of as splendid days.

Tucker is now facing physical tribulation. It may be asked, “When has he not?” The poor roly poly has fought urinary blockage, diabetes, had all his teeth removed and is now facing stage three kidney failure. He is being fed all sorts of medicines. Some days he is lethargic, and I think he is despondent.

But other days, he is his usual cheerful self. He meets me at the door when I come home, and talks to me about his day. I like to think he is telling me that he’s glad to see me. I pick him up and he purrs some more.

Mirtazapine has a sporadic effect on Tucker, and will make him eat well one day and not the next. On the days when he eats sparingly, I will supplement his consumption with syringe-feeding. It doesn’t put a lot more food into him, but it helps keep him going on those poor days.

He doesn’t play any more, but he will still smack the lint-roller if it looks like it needs it - and, for some reason, Tucker thinks it needs it often - and he will still purr when I play peek-a-boo with him. A good brushing is always enjoyed, and, now and then, he ambles over to me while I’m in the kitchen and rubs against me.

His blood-glucose numbers are re-arranging themselves, and I hope to see a new pattern emerge that will give me some control over them. Until then, my little sausage-shaped cat puts up with needle-pricks to the ears, though he can’t understand why they are being inflicted upon him. And his kidneys, dying, cannot cleanse his body the way they should, but subcutaneous fluids are helping as much as they can.

I have learned much from my cats. Parker showed me that if one day is bad, the next may be good, and the fact that it brightens the darker periods makes it not just good, but splendid. Cats don’t worry too much about the future, I believe, and so a good day to them is a good life, and a bad day is merely something to be endured until the next day brings something better.

While my Day of Remembering has past for the year, I note that Tungsten died six years ago today. She and Bear-Bear, Parker and Cammie, Raleigh and Josie taught me that while there may be misery and suffering, a cat forgets all of it on the good days. When there is clean water and a full tummy, sunshine to lie in and a comfy, warm bed at night, the bad days don’t matter as much. When there is purring, there are good days; when there is purring, there are splendid days.

For Tucker and me, these are our splendid days. 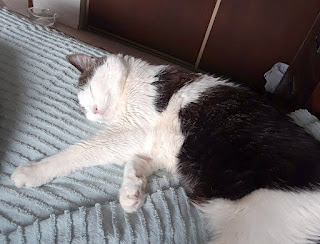