While Tucker continues well, I was disappointed during the last few days to observe that reducing his dose of Mirtazapine too much caused an unacceptable diminution in his appetite.

His prescribed dose is 0.1 milliliters per day. Earlier, as I wanted eventually to take him off the drug all together, I had, after some time on the full dose, cut it in half. This proved satisfactory, as his appetite slipped but little, and he continued to eat. The next step was to alternate days, one day of 0.05 ml, the next of none. This did not work, and he did not feel like eating. This weekend, I have restored his original prescription, which I will halve once more tomorrow. Tucker is eating a pleasing amount again.

As some have found that his kidney medicine (“kidney-powder”) caused a suppression of appetite in cats in their care, it may be that the roly poly’s consumption of that drug is contributing to a lack of appetite when he’s not stimulated by the Mirtazapine. To test this possibility, I will need to cut off Tucker’s consumption of both drugs. This I may do later, but only after I re-establish a regular schedule of Mirtazapine and see its success over at least a week. I would dislike discovering that the kidney-powder has an adverse effect on my boy, as I believe it is working. He is neither drinking nor wetting excessively; the medicine appears to be fulfilling its purpose. It may be a case of keeping him on both drugs.

Therefore, though some complications have ensued, Tucker is doing well. If the Mirtazapine doesn’t lose its efficacy over time, then there is a solution, albeit not ideal, for both his appetite and the worst of his renal failure. Keeping the Tuxter on two drugs simultaneously is not what I want but if, as a result, he is in no discomfort and in fact is prospering, it is a solution with which I can live. More importantly, so can Tucker. 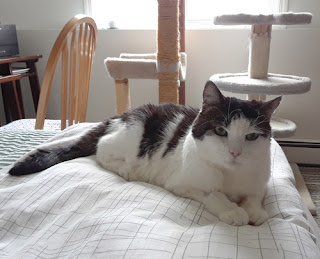