Stay and Get It

Cats can be very lazy. Despite their sudden bursts of activity, torpidity is, I think, their natural state. They don’t like having to put themselves out for anything or anyone, even if it is in regard to eating, one of their favourite pastimes.

I recall Tungsten used to enjoy being fed on the bed. But then, that was Tungsten, and she deserved such catering. Cammie, too, had her food brought to where she lie. But she had allergies that necessitated her staying away from others’ food, and then she went blind, so bringing her food was only right. Josie also was waited upon, but only when she grew old.

So what’s this guy’s excuse? 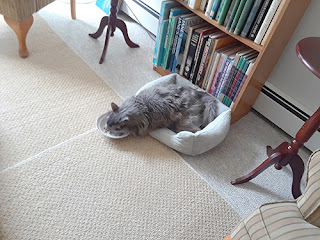 To be fair, Neville isn’t always lazy. But when he is, he will lie in his bed and stare at the food put down for him, even if it is just out of reach. He can be so lazy, in fact, that when he has consumed all the food on the near side of the bowl, he will stop eating and wait for me to turn the bowl to bring more food within mouth-range, rather than get up and walk around the other side. Out-lazying even the Mad Hatter and the March Hare, he would need the entire table pulled so that more food would be drawn toward him, rather than get up and move to a new chair. 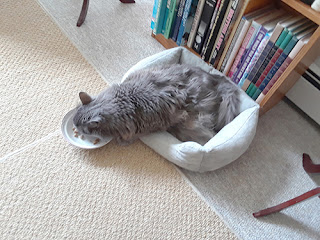 But there are compensations. When he sees his food approaching, he will give a throaty, nasally, mumbling rumble, anticipating the flavours that will soon be his. It’s good to have such an appreciative diner. 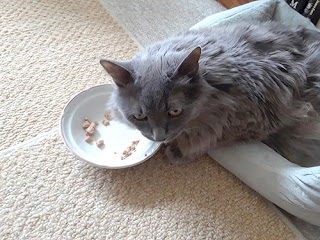