Given time, much can change in a cat’s life, and in her attitude. Playing is always a good sign in a cat. Portia had played a little previous to this weekend, but on Saturday and Sunday, she was more active, especially with a string-toy. She also wrestles with a fuzzy mouse on her own, which is, I think, a better sign. 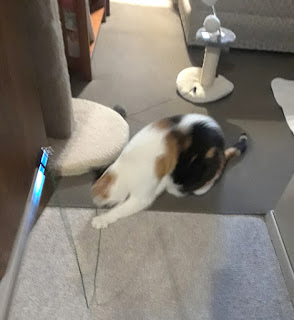 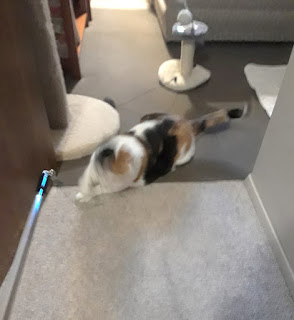 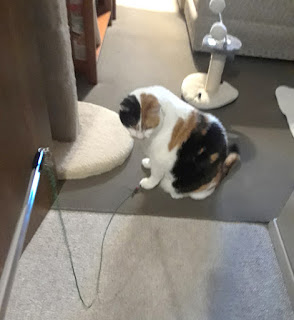 She still spends much time in the library, though that doesn’t worry me. She knows there are other cats in the apartment, and isn’t keen on meeting them right now. Periodically, Renn and Tucker will use the library’s litter-box, and Neville favours its water-bowl; the Former Thin Man also likes to stare at Portia, though I try to discourage this. Even so, the newcomer feels the library is her safe-zone, and is secure there. When she wants that extra bit of security, she retreats to the corner behind a bookcase.

But when she comes out, she explores. Yesterday, she found a box, in which she spent some time scrabbling with her claws, fighting with a mouse, and relaxing. 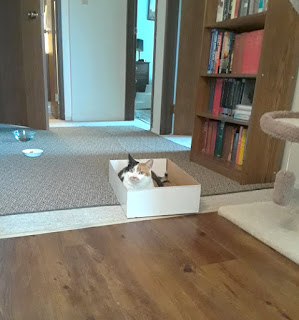 Later, in the evening, I sat on the library couch with her, me at one end, and she at the other. (There isn’t much space between us, but she has kept it, nonetheless.) This time, however, she adjusted her position, and lie beside me, up against me. I stroked her head, and she purred. This won’t happen every time we are together, but it happened last night. 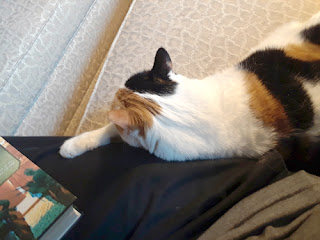 Progress is slow, but it is progress, and we both have time. Time erodes mountains, so maybe it will do the same to Portia’s suspicions and distrust. 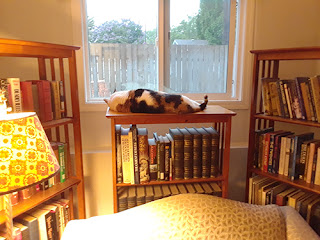