Thirty years ago, there was a British comedy tv series about the relationship between a long-widowed solicitor and a divorced schoolteacher. In the initial episode, there is a scene in which the former is about to ask out the latter, the first time he’s invited a woman on a date in thirty years or so. Full of anxiety, he mutters, “I haven’t felt like this since Suez…”, referring to the Suez Crisis when, probably, he was a very young and very frightened soldier. The way the actor delivered the line was both funny and revealing, and I use it to myself from time to time when confronted by a nerve-wracking situation.

Though not quite in the same category, I was nonetheless rather anxious as Portia took another walk about the apartment this evening. The perma-cats were in different spots and in various shades of rest. Our guest roamed into the bathroom, where she investigated the tub, into the sitting room, where she hissed at Neville, and into the bedroom. There she leaped up on the bed, to be confronted with a suddenly-wakened Renn. Portia hissed and dropped down to the floor again, leaving my big boy to wonder what had happened.

What did happen was nothing harmful or dangerous. Portia returned to the library soon after and had a nap.

Even so, I worried about her interaction with the beasts, and still worry about it. To be honest, I doubt that there will be a violent confrontation. There will likely be hisses, growls, maybe a few whaps, and retreats. But I worry nonetheless. When Portia explores, I am ready with a big, heavy towel (to separate battling felines) and wearing ‘Ove Glove’ oven mitts, very thick garments made from the same material as Superman’s cape. If they allow me to hold a baking sheet heated to 400°, they should withstand a cat’s claws. Maybe.

I think the newcomer will integrate well enough as I give her more opportunities. Her attitude toward me is ambivalent: purring will quickly switch to hissing and swatting, with rapiers extended. But I would rather she adjust to her own species before mine, as that would mean freedom from the library, companionship, new experiences and maybe playing and friendship. I can always wait.

But each time she comes out to explore, I am nervous. It may not be 1956 Suez, but I’m prepared for warfare, just in case. 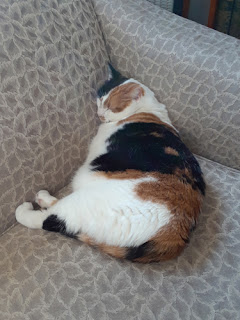