Good News from the Library

There is good news from the Cosy Apartment’s library this morning: Portia both ate and used the litter-box. The fact that she consumed some food is a relief for me - just as the visit to the litter-box was probably a relief for her - as it forestalls the danger of fatty liver disease, which may ensue if a cat doesn’t eat after a couple of days. Syringe-feeding her at this point would have been impossible.

Now that she has taken in some food, I can slowly introduce a better quality nutrition. To tempt her, I used only that with which she was familiar; I didn’t want anything to put her off. She has never eaten soft-food, her previous people stating that she always turned her nose up at it. But if there is one thing I am used to in the care of cats, it’s offering a wide variety of fare in order to entice them to eat better. (The fact that it’s rarely worked is immaterial…)

Using the litter-box is also important, of course. She both wet and pooped. The litter in the box is the same as the perma-cats use (corn-based) with a prominent, though relatively small, amount of the clay litter to which Portia is accustomed. There is nothing wrong with that sort, but it is more convenient to have her use the same as the others. And her use of it in this case suggests that switching her to another, when she is adopted, will be simple.

Rather more difficult will be getting Portia to trust me. She hides behind a bookcase most of the time, but when I come in and find her out, she will seemingly encourage me to pet her, coming up close to me, and even lying down, permitting me to stroke her head. Then she will hiss and, this morning, she swatted at me. My new house-guest appears to be of two minds about me, but I am encouraged that part of her wants some attention. I think this aspect of her presence in the Cosy Apartment is a matter of time. Now that she has eaten and used the litter-box, there is nothing that is chronologically constrained, and I can leave it all to her as to when she will trust me. I don’t think that will be too long in coming; in any case, I can wait.

(The photograph is rather terrible, but when she was closer, I was trying to pet her, and the lighting is that of a still-dark morning.) 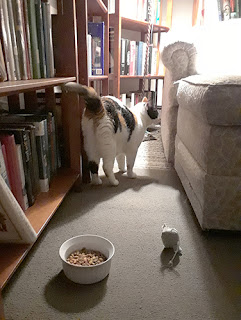