Welcome to the Madhouse

Portia arrived yesterday at six in the evening. The poor girl was scared and confused, and probably is this morning. During the evening, she alternated hiding and lying in the open; she allowed me to pet her but would hiss at me, as well. She doesn’t trust me, but neither is she terrified of me. 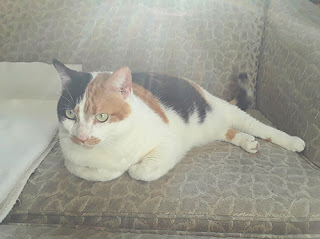 It turned out not to be the most propitious day for her arrival. The knob on my apartment door stopped working on the inside: it wouldn’t turn the latch, and I couldn’t open the door. I had to leave through the door to the concrete ditch and come around again. I could get in to the apartment but couldn’t get out. I and the resident manager replaced the mechanism; there was the pounding of hammers and the whirring of electric drills.

Then later, about ten-thirty, when all was quiet, I heard an explosion of anger and violence from the bedroom. I rushed in to see Renn having a spirited argument with a strange black cat on the other side of the open window. Tucker jumped up on the cat-tree to see what was going on and Renn turned his anger on the roly poly. The two of them ran out to the sitting room where Tucker took it out on poor Neville. It took a few minutes to calm everyone.

Then later that night, both Renn and Tucker threw up at different times; I had to clean up their results, with lights on and noises of moving about.

I didn’t hear Portia during all of this; she must have been trying not to attract notice in this madhouse to which she had been brought… 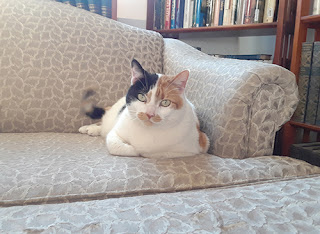 But this morning, she was lying on the bookcase under the window, looking out. I feel sorry for her. She’ll have a much harder adjustment to make than did Xanadu, or the Felons; even Jessel, during his temporary stay with me, had the advantage of coming in to safety from the outside. Portia will miss her home for quite a while, I suspect. In time, I hope she will realise that her new residence isn’t quite as crazy as it seems.