A Puzzle, with Fur

Tucker’s numbers in the morning are fluctuating a bit right now. After the extreme low of Sunday, he started Monday with a more normal 17.7. This morning, however, he was just above ten. That would actually be a very good number for him, if it came several hours after receiving his insulin, but it is abnormal in the morning, before his injection, and therefore concerning.

I could take the roly poly to the hospital for tests to be run, but I have found that these rarely result in any concrete conclusions. I will deliver one of the beasts to the doctor when I suspect something is wrong or when I can’t think of anything to suspect. In this case, however, I’m pretty certain the doctor would find nothing substantial on which to base a treatment, and I would be told simply to monitor Tucker’s blood-glucose levels, and act accordingly. After years of having cats, one acquires an idea of when a veterinary visit will prove helpful and when it won’t.

I do have some thoughts about the Tuckster’s current state, but they aren’t really helpful, so I will continue to watch my boy and note what I see. In the meantime, he remains a happy little fellow, my sausage-shaped shadow. 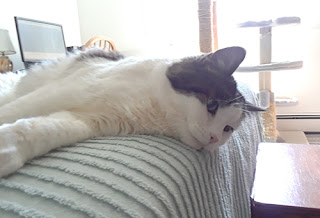