One Mystery Solved, One to Go

While much of my attention has been focused on Portia and her wetting outside the letterbox, there is another matter that is in my thoughts; a second front in my war on feline ill-health, as it were. This one is, perhaps, not in need of as urgent a solution as Po’s issues, but is troubling and frustrating. It is Tucker’s wildly inconsistent blood-glucose numbers.

Over the past week and a half, the roly poly’s numbers varied greatly from morning to morning, from very low to medium to high. Some days, I could give him his prescribed two units of insulin, some days only one, while on others, it was not safe to inject him with any. I and his doctor could not determine what was causing the fluctuations.

Then, I recalled that Tucker was on another medication. He was taking Mirtazapine, to stimulate his appetite. I conducted some research into the effects of Mirtazapine on diabetes, and the results were interesting. Though my investigations were superficial, I found numerous sources that stated that the drug does indeed affect diabetes.

Britain’s National Health Service stated definitely that, “If you have diabetes, mirtazapine can make it more difficult to keep your blood sugar stable.” An article in the U.S. National Library of Medicine begins by writing, “Mirtazapine is known to induce weight gain and possibly leads to exacerbation of diabetic profiles,” (my italics). And a third entry from the National Institutes of Health, in the U.S., starts with the headline, “Mirtazapine may show anti-hyperglycemic effects…”

Though, as I wrote, my research is very light, I think this is enough to suggest that Mirtazapine may be the cause of Tucker’s crazy numbers. The good news is that my sausage of a cat doesn’t need Mirtazapine to survive. It has helped his appetite tremendously but, while the doctor stated that Tucker could be on it indefinitely, I never liked the idea of giving it to him forever, or even in the very long-term. If for no other reason, I think that the drug’s effects may diminish with constant use. I would rather keep it for emergencies. As well, I wanted to see if his appetite would be sustained without the Mirtazapine, after he has received it for a few weeks.

Tucker is no longer being given Mirtazapine. I hope that by tomorrow his blood-glucose numbers will be stable enough to return to a consistent dosage of insulin each day. (I believe that inconsistency hurts the diabetic treatment.) With luck, the Tuxter will experience decent levels in his diabetic numbers AND continue to eat well. Considering the buffeting his health has taken through in his life, and that he has survived and thrived, I think luck may be on our side. 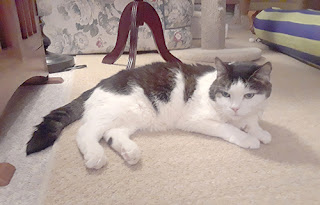