Hanging Around with History

Some years ago now, I was cleaning out closets in my home and came across a coat-hanger. It is from an earlier era, when things were made better and were less costly, for customers and businesses alike. This coat-hanger is stamped with the name and address of the Nordale Hotel, in Fairbanks, Alaska. 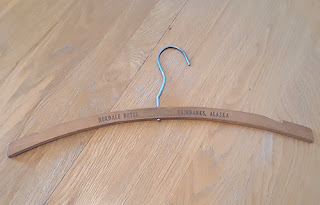 The Nordale was, I believe, the principal hotel in Fairbanks, located on Main Street, and was famous for Eva McGown, the unofficial hostess of the town, whose encyclopaedic knowledge of lodging in Fairbanks was recognized as of great importance during the Second World War; she was employed by the town’s chamber of commerce, living in and working out of the Nordale. Tragically, she and three other people died in the fire that destroyed the hotel in 1972.

I suspect the hanger ended up in my closet through my parents. They were in the RCAF during and after World War Two, and were stationed for a time in Whitehorse, in the Yukon Territory. The Alaska Highway, then newly constructed, passes through the town on its way to Delta Junction, in Alaska, the official end of the road, though it continues on to Fairbanks. Though my father and mother never went to Fairbanks, that I recall, it seems probable that a traveller from the American end of the highway stopped in Whitehorse, where the hanger he took from the Nordale Hotel stayed until my parents used it and, evidently, kept it. 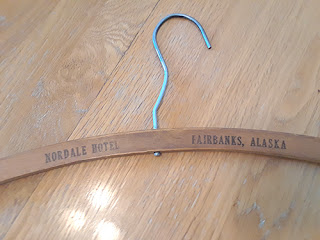 I imagine that, though it might cost them something in lost property, hotels in the old days wouldn’t have minded such items being taken by guests. The items would end up hundreds, even thousands of miles away, and provide free advertising. The hanger might as well be a tiny billboard declaring, “When in Fairbanks, stay at the Nordale!”

For me, it’s a little bit of history, a piece of a time when a journey in the north country was an adventure, and a new town could have been a different world. And when even common, everyday objects, such as coat-hangers, were well-made.