I like thunderstorms. I enjoy the sky growing dark, the flash of lightning and the fresh scent of rain. I don’t like it when a boisterous storm comes at the cats’ meal-times.

All the beasts in the Cosy Apartment pay attention to thunder. The time was, I recall, when such distractions ruined the boys’ dinners. They might hide; they definitely would not eat, and would not want to afterward. Now, it seems, things are different. The very loud bangs will cause consternation among the boys, but, for the most part, they don’t let the noise disturb them too much. They dine - perhaps in a way that resembles patrons of a restaurant who fear obnoxious individuals on the pavements outside will come inside – but they dine nonetheless.

This afternoon was the first time I observed Portia during a thunderstorm. Well, I didn’t observe her. She hid. I suspect she was behind a bookcase in a corner of the library. I called her when her food was ready – she learned the words “dinner” and “snack” even before she recognised her new name – but she did not appear. 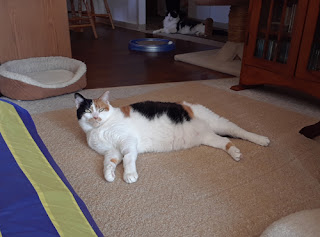 Fortunately, when the storm’s fury had abated and a relatively gentle rain descended, my new foster-cat came out. She evidently felt that out of hearing was out of mind, for she cleaned her dish.

I am growing to know more and more about Po; how she behaves, what she likes, what she does not. I am beginning to understand when her hisses may be only acknowledged and when they must be heeded. Now, I know what she thinks of thunderstorms. They might be frightening enough to postpone a good repast, but not to cancel it.

And they always move on, making way for sunshine once more. 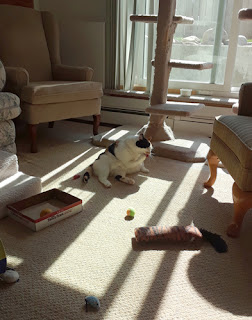