Portia continues to confound my efforts to persuade her to wet in litter-boxes. I purchased a container of Dr Elsey’s ‘Cat-Attract’ litter and, after three days, Po has used the box less than before I put the new product in it. I think she distrusts it. The other cats have used it without complaint…

I have tried other solutions. I have placed two, and then three boxes, in the library. I have used a box without any litter at all (a friend had success with that tactic), and I have made my own ‘cat-attract’ by spraying small amounts of cat-nip spray on the litter and inside the box. None of these has induced Portia to do as she had the first two months of her time with me.

Last night, I moved the filled litter-box to the other side of the library. She used it in the night and did not soil a soaker-pad, though I cannot believe this to be conclusive evidence of success, as she pooped in the box as well as wet; the urination may have come simply because she was already in the box for number two.

It is a frustrating problem not only because for most of her time with me my new girl was perfectly content to go where she should, but because she will still use the library’s box for solid waste, AND because she also periodically visits the boxes in the storeroom without any mishap. As well, considering the number of times she wets on the soaker-pads, I don’t think she needs to go each time; I think she goes because she feels she should. And though soaker-pads can be a hindrance as well a help (the smell of urine never seems entirely to leave once it has been applied), they were in place during the two months that Portia diligently used the litter-boxes.

I have a couple more possible solutions to try before I make an appointment with a psychologist. Whether it will be for me or her, I can’t yet say.

However, in other matters, my confusing calico is progressing. She is hissing much less at the other cats, chases them only when they run (which is itself rarer) and she looks forward to her time with me. When I go into the library for whatever reason, she will frequently follow me, wanting to spend time on my lap. I try to give her that time at least once a day; some times, she lies on or against me for as long as half an hour. I will pet or brush her for some while; then her purring will stop, and I know she wants just to lie still, without stimulation. So I will read or watch my movie, and she will keep me company. Portia wants companionship, and wants affection.

Now, if she’ll just want to use the litter-box all the time… 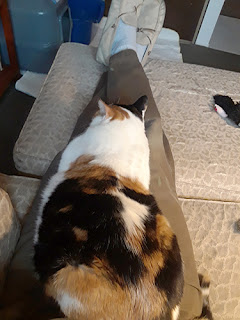