The attention of this blog lately has been on Tucker and Portia, with a bit of Neville thrown in. Evidently, Renn has been feeling left out. He decided to remedy that condition.

Yesterday I came home to a surprise. It’s always a bit of a guessing game as to what I will find when I come home. Yesterday, I discovered that Renn had thrown up. But it wasn’t just that: it was where and how he had thrown up. He likes to lie at the top of the taller cat-tree in the sitting room. He apparently felt nauseous while there and relieved his feelings over the short parapet, and in the direction of the glass door to the ditch. 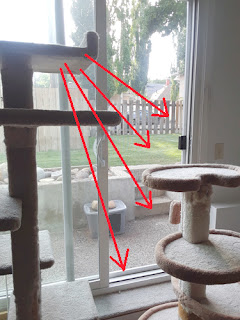 It was a prodigious amount, and covered much of the glass. It also hit, or fell, to the carpeted ledge. There it lie, or clung: hard-food, soft-food and stomach bile, being gently warmed by direct sunlight until I returned, to add vinegar and warm water to the mixture. The aroma is better imagined than described.

The interesting - and frustrating - thing is that if the door and screen had been open, most of Renn’s refuse would have been fired out into the concrete ditch. If I had been home - and if I had thought of it - all the mess could have been avoided by opening the door. However, I console myself by realizing that I likely would have tripped in my hurry to save the situation and have broken something vital.

Well, Renn was all right, and ate a good dinner. Why not? He had apparently been dissatisfied with his lunch. 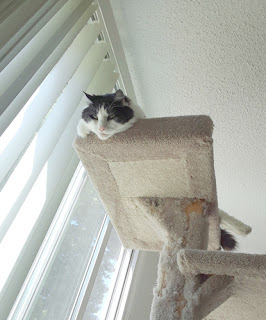