Renn has been with me for going on twelve years now. He will be fifteen this year and is set in his ways. Now and then, however, even he changes.

Because of his recent stomach upsets - none in more than a week (knock on wood) - he was put on special food by his doctor. The tinned food left him cold. But for some reason, he has taken to the gastro-intestinal diet hard-food. It must be coated in something tasty (and therefore likely unhealthy) because most of the cats like it. But Renn asks for it.

This is new. I was working at my computer in the bedroom recently and my big boy sat on the bed looking at me. Then he gave a curious, drawn, verbal complaint. When I saw how he was sitting, I knew he wanted food; it was his usual, expectant position, ready for a food-bowl. But the vocalisation was unheard of, so to speak. I brought him his hard-food and he had quite a good meal from it.

He now does this two thirds of the time when he wants to eat. He knows that I will feed him, unlike the others, when he demands it, since he has lost weight over the last year or so. He’s generally a quiet fellow is Renn, but I don’t mind his new means of ordering me about; if he likes his food, all the better. We both are pleased with this old cat’s new trick. 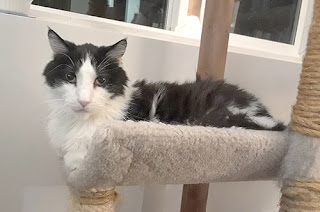