Night is for Sleeping

Rather than switch Minuet between the library and the bathroom (the latter at night and the former during the day), I decided to keep madame in the library, giving her a comfortable and secure room of her own. This will, I hope, help with the inevitable stress of being in a new home, and the disappearance of all she has known.

This arrangement, however, left Auric with the bathroom at night, if I wanted to continue to isolate him during the dark hours. I decided that that was not fair to a cat who was now used to his new home. I determined against sequestering the Golden Boy last night.

Though prepared for hours of fighting and chasing, the night was quiet. Auric came to bed when I did and lie next to me all night. Like Hector, he felt he needed to occupy the centre of the bed, though he did change positions a couple of times through the hours. By and large, he sleeps the sleep of the innocent (which, for Auric, counts as a disguise.)

This did leave Hector out. My dark knight did not care to sleep on the bed with his periodic tormentor, and so slumbered elsewhere. I will encourage him to join us on the bed; there is plenty of room, sort of, and strife is little when all are attempting to sleep. Renn consented to sleep in his usual spots, though he was miffed, I could tell, when he tried to lie down next to me and found Auric there, instead. Neville slept on his cat-tree.

Auric is integrating into the population of the Cosy Apartment. It is not a drawn-out integration and is progressing at a reasonable pace, though it is not without complications. He needs to cease chasing Hector; I think that will come in time. Not chasing him at night is a step forward. 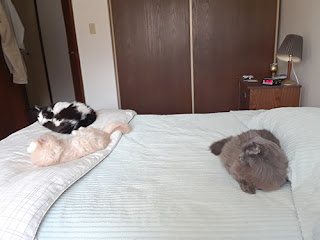