Among the problems that were ascribed to Minuet when she was given up by her previous owner was – along with the non-existent diabetes and the inappropriate wetting, which has been solved – her absence of grooming. This was, it turned out, a falsehood.

To be generous, I can blame the belief that Min doesn’t, or didn’t, groom herself to the fact that her bum sometimes needs cleaning. But she is nineteen years old – over ninety in human terms. While I wonder about such comparisons, since veterinarians rate a cat as senior at the equivalent of forty human years, the truth is that a nineteen year old cat borders on the ancient, and if she is not as supple at that point in her life as she was a decade before, it is understandable.

Minuet nonetheless does groom herself. She tries her best to clean her nether regions, washes her legs and feet, and is quite forceful about cleansing her face after she eats. This vigour is interesting. My other cats also clean their faces following meals, of course; it’s amusing to watch all of them engaged in the same hygienic activity a few minutes after breakfast or dinner. But I don’t think any of them is quite as determined about it as my very-oldster.

Could this be a feature of cats with the adorable smooshed-in countenance? When, for instance, Renn, with his big nose, eats, it is probably his snout that receives most of the debris from his meal. The same goes even for a cat with a more average proboscis, such as Hector. But surely Minuet, with her tiny nose in the centre of a relatively flat face, must have bits of food, or flavoured sauce, almost evenly distributed over that beautiful visage of hers.

It may be, of course, that she is just very conscientious, though I can’t help thinking that the shape of her face makes her dining a little less discreet than the average cat’s. In any case, even at nineteen, Madame intends always to look her best – and succeeds. 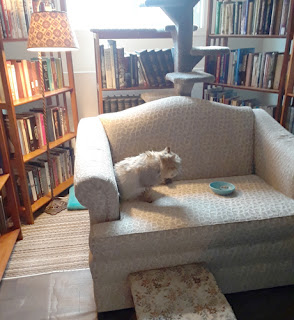 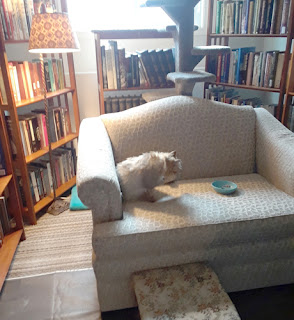 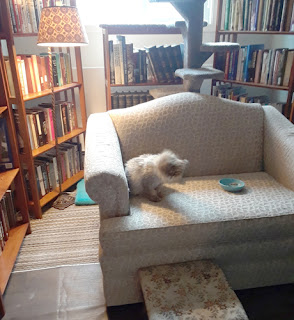 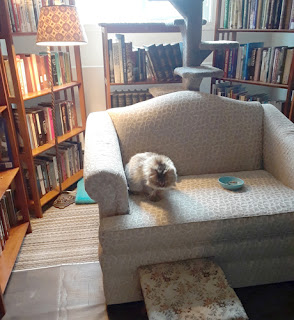