The cat with whom Minuet has the most interaction is Neville. The Nevsky likes lying on the top of the short bookcase in the library, and Min sees him go there all the time. The only instance when she expresses displeasure with his company is when she is on the couch and he hurries past her, using an arm of the furniture to ascend to the bookcase, rather than climbing the cat-tree. 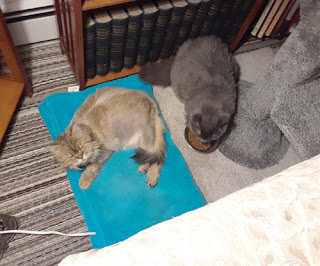 The object of Neville’s affection in the library is not Minuet, however. It is Minuet’s hard-food, for which Nev has a preference. I leave it out for Minuet to nibble on; Neville knows this and likes to visit the bowl now and then, when he can get away with it. I disapprove of this thievery. On the other hand, it shows how much Minuet has come to tolerate the other cats, or at least the oldsters. She will never, I suspect, integrate fully with the others; at her age, that’s her privilege. But it’s good to see that there is a level of acceptance, if not satisfaction, in her response to the boys. 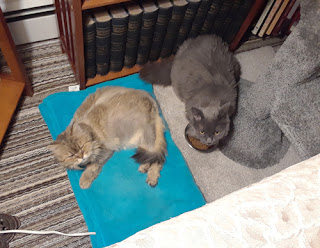