While the Lilacs Last 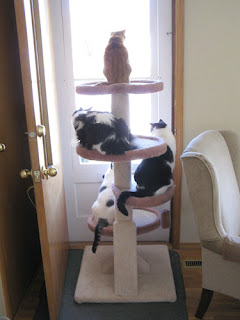 I was going through old blog-entries and found in one this photograph, from May of 2011. It shows my First Four taking advantage of the spring air coming through the screen door of our former house. Eleven years ago, I had no foster-cats, and this quartet was still with me; even Tungsten had almost three years left to her. They loved the fragrances to be smelled, especially those of the blooming bushes and trees, such as the lilacs.

I was remarking to myself just this week that the lilacs’ flowers seem to be lasting longer this spring than in previous years, though this might be an illusion due to a later blooming. Their aroma is my favourite of the season, and I regret when it disappears. However long they thrive, it is nonetheless the way of things that they will pass, and other flowers take their places.

Each blossom has its time, and each gives way to its successor; if the season lingered and the first had remained, those flowers that come after would not have sweetened the air in their own fashion. I may wish for the lilacs to remain, and live forever in their spring, but an infinitely wiser mind than mine has devised that it be otherwise. The best – and perhaps the wisest – that I myself can devise is that I enjoy their scent, while the lilacs last.