I took some time to watch a movie yesterday, and Minuet decided to join me. She is not as interested in cinema as are or have been some of my cats, but she consented to spend the afternoon with me. 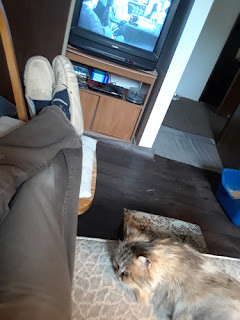 For the first time since she had come to stay at the Cosy Apartment, Madame lie on her side and settled down for a nap. Usually, even when she seems content and purring, she lies on her stomach with me. This time, she rolled over, and appeared more at ease. 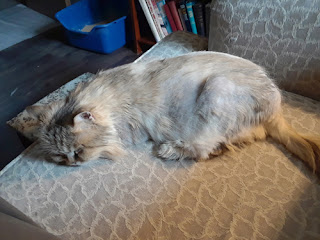 As an aside, you may be able to observe how much of her body is still almost uncovered by hair. Like a tiny bison, Minuet’s hair is re-growing quite well on the front of her body, while ignoring great patches on her sides. This may, as was suggested to me, correspond to her colouring, though most of her fur is a golden brown hue; even so, there may be differences of texture or tint that account for this. More importantly, she is untroubled by the distinction; she does not scratch or roll to relieve itching or irritation. 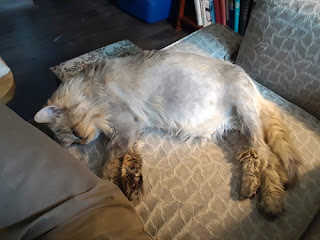 And yesterday afternoon, she was equally untroubled by consciousness…