Cats’ faces are very expressive, as anyone associated with cats will know. Their faces are probably a principal reason why we anthropomorphise these animals so strongly; it doesn’t help that much of the time when we assign emotions to certain feline expressions, we are probably right in our assumptions.

Take a look at this one.

Though Minuet remains for the most part in the library, she does venture out now and then. When the beasts are finished with their meals, I often leave remnants in a bowl near the kitchen for Hector to come by and clean up later. He almost always does. I leave the bowl by the kitchen because, its contents being made up of different varieties – the leftovers of others cats – they may not agree with Madame, and I thought her unlikely to come all the way to the kitchen to sample them. I was wrong.

Twice now, Minuet has come out of the library, spied the bowl on the floor and come over to eat. I was hesitant to remove it from her reach, as I did not want to discourage her in consuming what food was placed before her. I took a chance and let her eat. So far, there has been no adverse reaction. At least from Min.

Neville was another matter. Perhaps astounded that our oldest inhabitant was walking beyond the library, he evidently could not believe his eyes when he saw her. I was too late to record Minuet’s ‘al fresco’ meal, but not to capture what Nev thought of the episode. 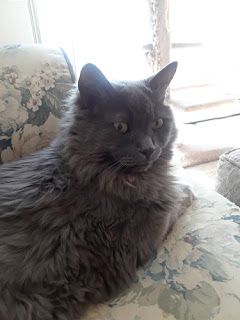